The level of your worth in our very fickle society can most often be measured by the caliber of people you pull to your event (parties, launch etc). Most often the number of Governors you attract and other Government functionaries inclusive would determine sometime the amount of respect some would give to you. That's just how our world is and it cannot be changed otherwise in just one night.

One of the young pillars of the Abuja business and social scene in the person of Aisha Suleiman Achimugu recently clocked 40 years old. And to celebrate reaching that age many believes precedes lives enjoyment, she threw down the red carpet and rolled out the drums.

The day of celebration was Friday, February 21, 2014. The venue of choice when it comes to event of this magnitude is always either the Transcorp Hilton or the ThisDay Dome in Abuja. For this particular event ThisDay Dome was the choice.

It was a super duper, scintillating and totally gorgeous event, that attracted top Government functionaries both based in Abuja & those outside, several 1st ladies were in attendance and one of those we could recognise very easily was the wife of the Governor of Nasarawa State and the man known to be the 'Father Xmas from the South-south, His Excellency Godswill Akpabio of Akwa Ibom.

To show you all the caliber of party it was, even the designer whose clothes x 4 the 'birthday girl' wore flew in to celebrate with her. It was none other than Lebanese born International designer of repute Walid Atallah, known world over for his wondrous outfits worn specially by the creme of the Arab world's royalty with some outfit going for as much as $1.2 million dollars. Walid came with Mariam Mohammed, the MD of SaturnGates who also owns the PR company that manages his affairs in Africa. Mariam as usual wore an heavenly white Walid Atallah's creation.

Aisha the gorgeous birthday girl wore about 4 different Walid Atallah's creation at her party and they were all exquisite with a capital 'E'. Just try to imagine the cost of each of those gowns!!!Hmmmmm.

It wasn't just Walid that came in, in tow with him also from Dubai was Najwa Sultan better known in the Arab world as their very own Beyonce. Najwa is one of the best & most popular singers in the Middle East.

The likes of the incomparable Asa, the superlative Tuface Idibia, the Arabian Beyonce-Najwa Sultan & the popular South African group Mafikizolo all performed to everyone's delight at the party. Prior to this party at the ThisDay Dome, a couple of friends of the birthday girl had hosted her to a  surprise birthday shindig a couple of days before at another venue in Abuja that had the likes of Banky W, Chidinma & Addiction performing.

One of the major highlights of the main party at the ThisDay Dome, was the stupendous 40th birthday cake(s). It was humongous and couldn't have been less than 40 cakes in all in tiers all placed together. It was dramatic no doubt. See what money can make happen!!! The other highlight was the change of clothes. It was one dramatic Walid Atallah outfit after another in Blue-Yellow-White and another colour.

All in all it was a big party that was very well put together and all who were there attested to the fact that they had major fun.

For those who might not readily recall who Aisha Suleiman Achimugu is. The young lady is the MD/CEO of Felak Concepts Limited. A company that is into Consultancy Services related to Health, Equipment procurement, training and Capacity building. Prior to this the award winning Dr. Aisha had made her mark in maritime & transportation engineering. She is the 1st woman transaction advisor/consultant to develop a seaport (Ibaka Seaport) in Nigeria.

Happy birthday and many happy returns of the day.

FOR MORE PICTURES AFTER THE BREAK. PLS CLICK ON READ MORE BELOW 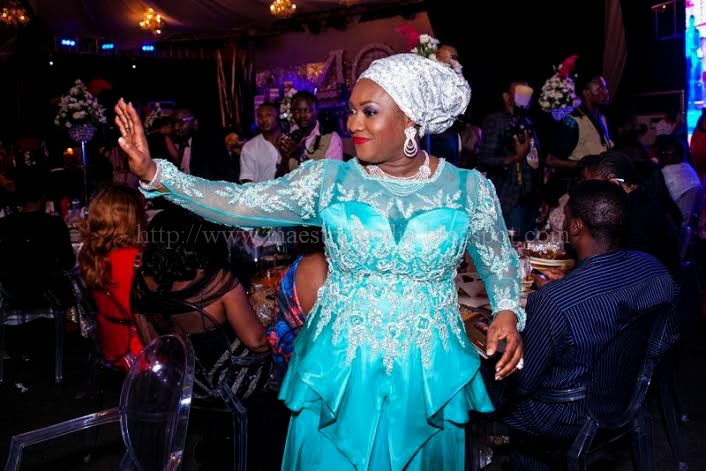 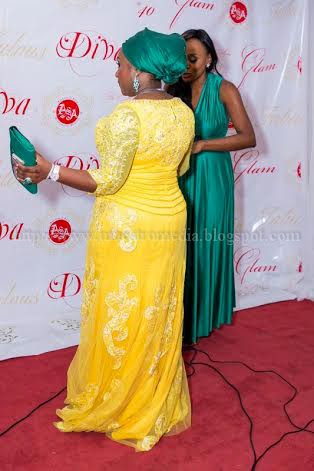 Posted by maestromedia at 2:43 PM

Click my name for all your celebration cakes n cupcakes, Cheers

The cake looks garish. I could have sworn she was older. She looks older and behaves older. I guess when you live the fast life, it ages it. Congrats. That doesn't look like Bola. A though.

the cake is quite garish to me abeg..looks like an alien

This lady looks way older than 40. Ruth Osime was 50 and this lady beside her will make Ruth looks like her daughter.

Wow! Gorgeous cake. Click my name for a checklist before you say 'I do'