WHO IS THE ULTIMATE QUEEN OF FLUXING BETWEEN IMELDA & TM? 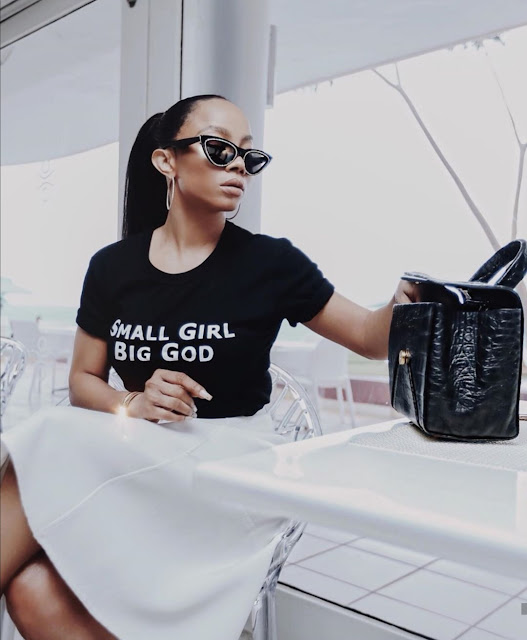 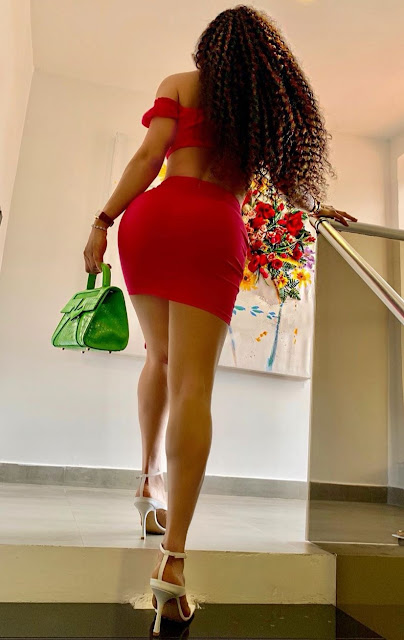 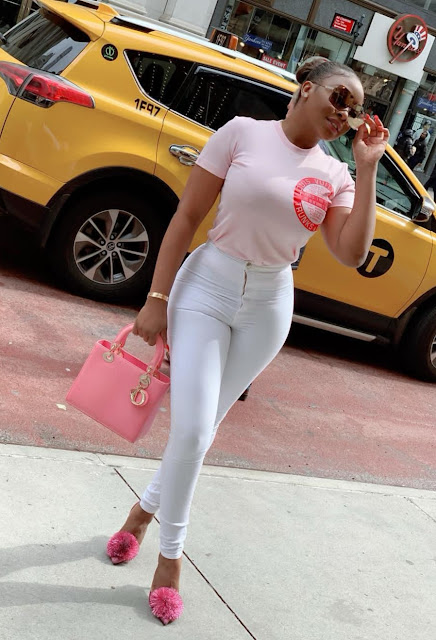 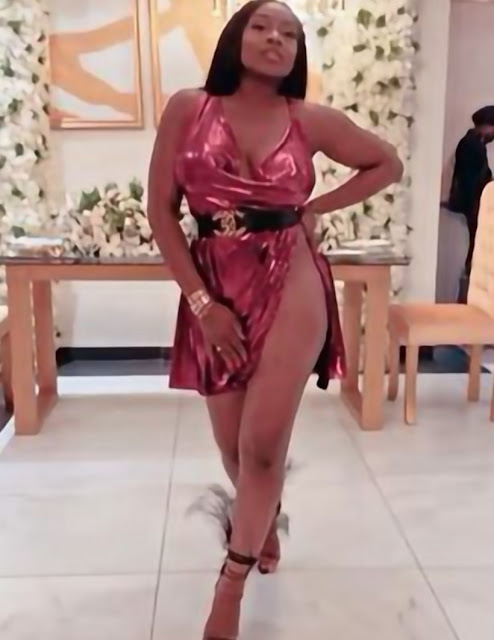 Everything about the 2 of these gorgeous ladies speaks/shouts FLUXING heaven. Both are 'avowed fashionistas' to the core. We doubt if there's any 'visible female celebrity' worth their salt currently on their levels. Toke particularly maybe because she's more in our eyes stands out the more. Her 'multimillionaire Naira' valued home, must be filled to the brim with awesome  fashion apparels that would astound the biggest collectors, be they shoes and bags, clothes/garbs, accessories and things she gat them all.

Except for maybe bags and shoes that can be repeated, basically because we all most often have our favorites that can be carried more often, we don't think Toke has repeated any garb she's worn before in eons. It's always something new everyday. Her collection of branded handbags must be out of the world by now. From the Hermes Birkins and Kellys in different colours, to the Balenciagas, Guccis, Prada, Dolce & Gabbana, Celines, LVs etc. She most definitely might have a whole room as her walk-in closet, which would be some kind of heaven for some other ladies out there. Her Jewelry/watch collection cannot be less than 20m, even closer to 50m if not more. We are talking about the Rolexes, Audemars and Cartiers and the likes she loves to wear plus them trinkets, studs etc......

The well paid OAP, also best-selling author, influencer-another space where she makes cool consistent millions from, fashionista to the core, has certainly done well for herself in the last 4 to 5 years. After seemingly escaping from a troubling relationship/marriage that seem to have held her down. She seemingly arose from her doldrum, her own ashes like a Phoenix and has since not looked back ever again. She has her own hand bag brand TM, and truth be told without mincing words, those bags are super well made. If Nigerians would support each other and not have some other negative thoughts in mind, by virtue of those bags alone, she could already have hit pay dirt sinc, llike she must have struck oil or a diamond mine. She also owns her own body care range, though it's more underground than out there and has not grabbed our attention like it was intended. Is Toke our own 'Nigerian Kylie Jenner' in the making? Is she the ultimate queen of FLUXING?

Don't under estimate her at all! For someone who clearly has the Kardashian's as one of her heroes, she might be on her way to getting to the very top. And to dismiss her ambition is to do so at one's peril.

For Imelda, she has not been there at the top somewhat has much as Toke. But in the last year and maybe half, she's climbed quite rapidly up that ladder and has been causing major headache for others who see her. She has become a fashionista of note to fear and respect. Over the short period of time, she has acquired all the bags, shoes, clothes and things that many had taken eons to acquire. Who says money, good money at that, can't buy it all???? Hmmmmmm.....

Unlike Toke though, whose vocation is more known, we only know the periphery about Imelda sometimes spelt Emelda. She was supposed to have owned a lifestyle store selling hair before and it's been said that a super luxury store is upcoming soon. Her garbs and accessories are to die for in the last a year and half. And as a testament to her arrival on the scene and no more on the periphery, she launched her brand spanking new, black Range Rover that did set her back a couple of tens of millions earlier this year, more precisely a few months ago.

Both ladies do strictly 'Business Class' and might do 1st class also a few times depending and in fact may do private sometimes. While Imelda's chariot is the 2019 version or better put edition, Toke's Range Rover Sport is about a few years older. Though someone had tried to claim she has a Bentley tucked or packed quietly away somewhere, knowing her we know that if she has bought such, she would have driven it and not hid it at all.

While Toke's self owned Ikoyi apartment is known to have cost her some whooping hundred of millions plus, we have only heard that Imelda owns her own property(ies) too (speculated to be in the GRA/Island).

Both ladies are single, we don't  know if they are searching. They are 'avid travelers' and like those who know them says, very fun to be with.

Who then of these 2 is the "ultimate queen of FLUXING"!!!!

See our 2 delightsome gold fishes with no hiding place splattered all over this post.  Dazzling all comers in these pictures.

Plenty more after the break. 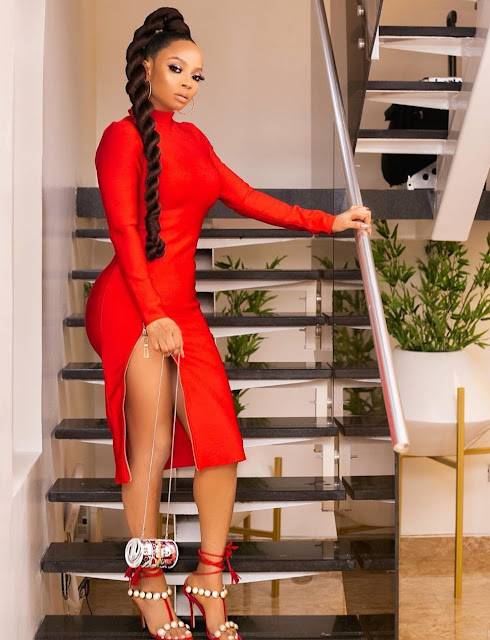 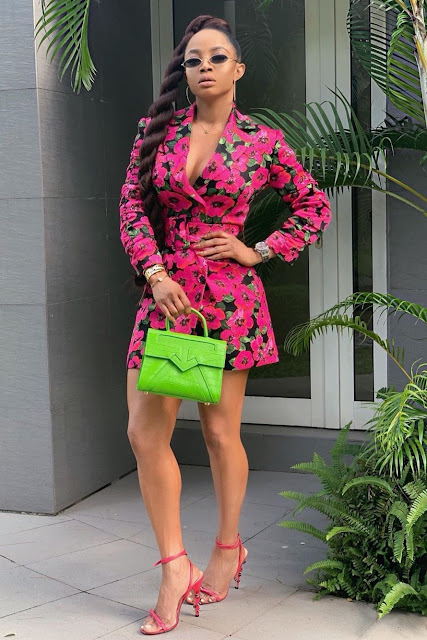 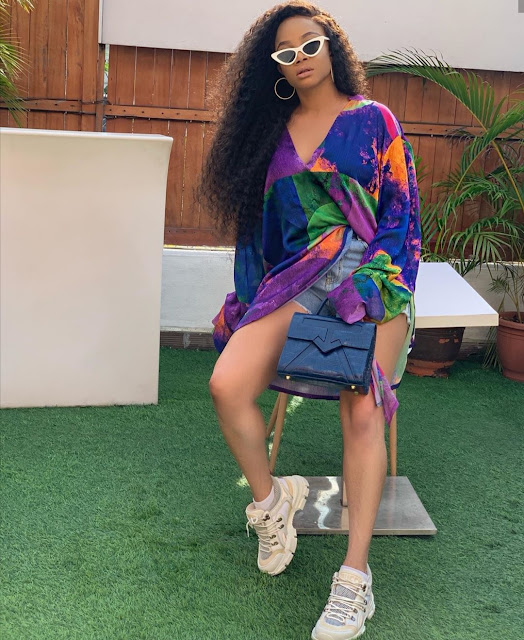 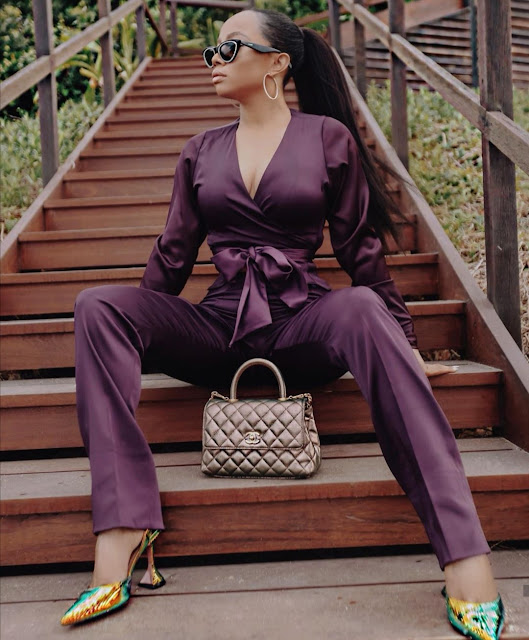 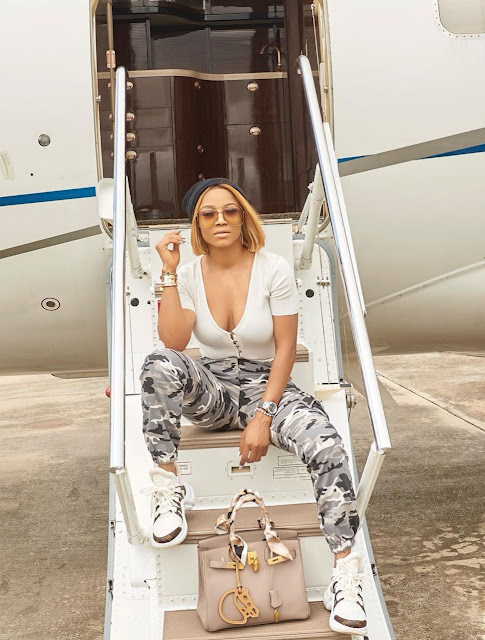 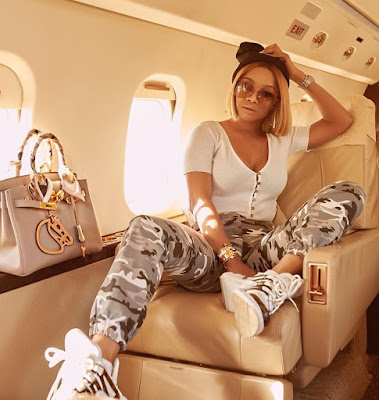 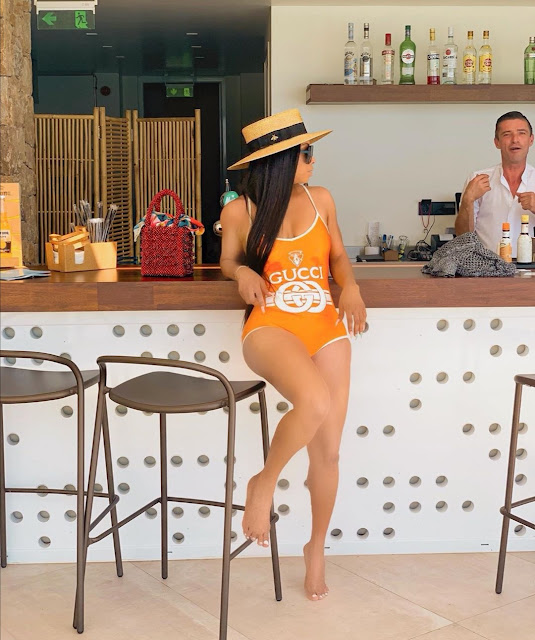 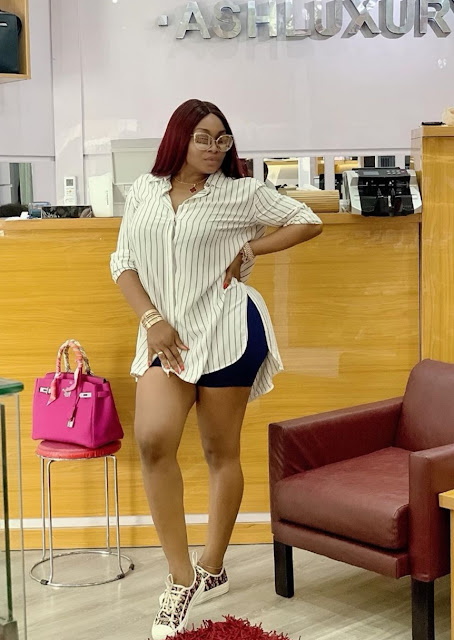 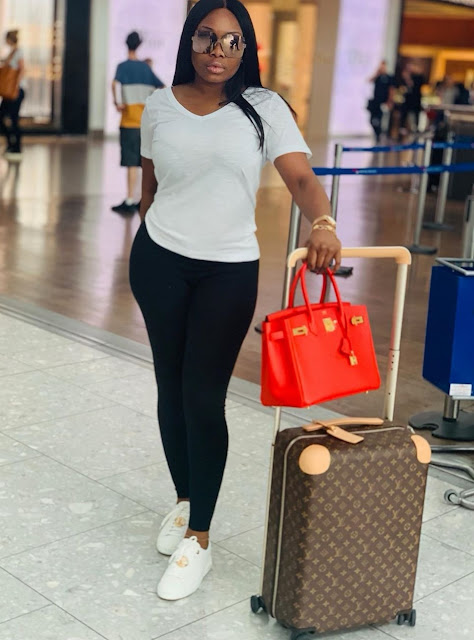 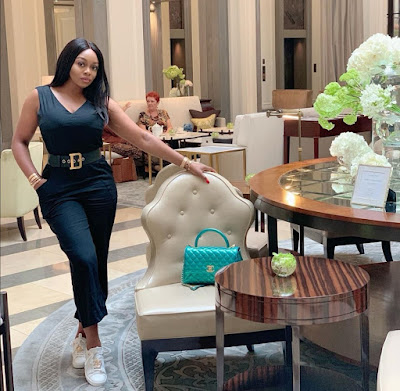 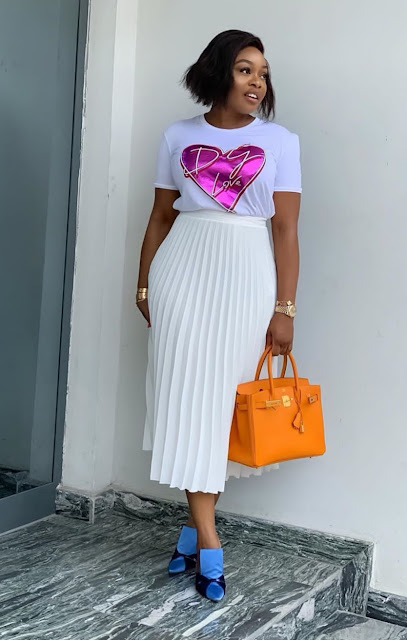 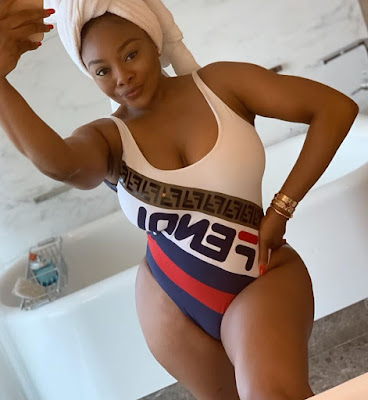 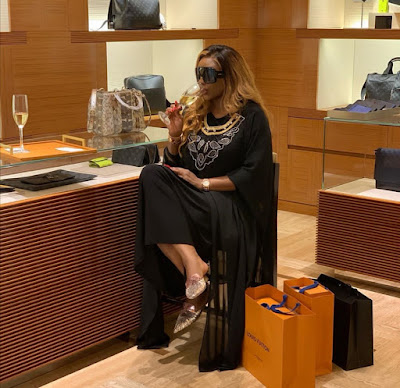 Posted by maestromedia at 1:02 PM

Alobs there’s no comparison between sleep and death.
TM ✊

Both ladies are queens, however Toke seems to be somewhat higher than Imelda. Quite frankly and without beef, Imelda’s rise was rapid, in fact she caught everyone by surprise and she’s not doing badly at all. She now rubs shoulders with the people she used to look up to if not intimidate them sef!

Obviously, Imelda is more real and naturally complexioned.
Toke’s story reminds me of her best friend’s Bobo wa Risky’s story-that went from charcoal black, housemaid look to trans-glam. Toke was razz and bush before. But she reinvented herself and evolved to where she is today...who remembered her weird Englis, a mix of ameriangloitalian-Naija english to now, just “Toke English”. Which we still can’t place the accent. Either way, we can’t celebrate women that we know the real source of their income. Sleeping with people’s husbands and wrecking homes just so they can carry a luxury bag is so unimpressive. To each her own.

Good for them!But I prefer a pretty, quiet girl! Not on any social network! Has a job and keeps to herself! I like young married chicks! Any girl on Snapchat or instagram, I don’t date!

I wish it can be made compulsory to test your chick with gadgets to make sure that they are free from infection before sex! Most of these girls on Instagram are dirty! Forget the looks and perfume scents! They have all been passed around!

It’s not fair to generalize...some ladies are actually very quiet and private on Instagram and/or other social media platforms.

Either way, we can’t celebrate women that we know the real source of their income. Sleeping with people’s husbands and wrecking homes just so they can carry a luxury bag is so unimpressive.

What is Emelda’s ig handle?

Imelda is sort of edging Toke out. We know her luxury goods are real because she documents her buying on social media, while Toke is being featured as a favourite customer on Chinese knockoff stores social media. Also while most people can tell you who Toke's sponsors are going back the past 5 years, nobody can tell you who is behind Melly.

Toke only legit beats Melly in terms of owning a business, because all Melly seems to do day in and out is shop as of she swore am oath at a shrine to do so. Toke has business but clearly isn't good at it. She has tried bleaching cream business and upon all her unnatural yellow, it seems to have folded. She also has a bag line even if nobody seems to be buying, but that's because Toke would rather flaunt a fake Birkin than a bag from her own line. And if the owner doesn't believe in her own product why should anyone?

Good for you fa.
You are not these ladies market in any way shape or form, so it's kuku good that you don't like their type.

Taket a pig from the mud, cloth it gucci, or any luxury brand, pig is a pig.

Taket a pig from the mud, cloth it gucci, or any luxury brand, a pig is a pig.

All I saw is ladies with low self esteem, without all this so called brands/material shit, they are empty.