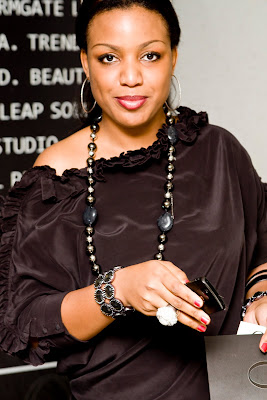 She was the very beautiful friend of man about town Lanre Nzeribe, who had previously been linked with many celebrity ladies, befrore things went awry, they were said to have been business partners, with Folake taking up very large space at Lanre's mall on Adetokunbo Ademola, Victoria Island, same spot that used to house that joint that never really took off-Saga 8, she launched her own eatery named after herself-Flakies fried chicken, she also opened what many had thought was probably the biggest and one of the most beautiful bar/lounge and nite club-AQUA 27, which never really hit it big like it was anticipated, she also moved her boutique, which used to stock very trendy fashion apparels to another space in the mall, all that used to be the good times, not too long after, the business partners were said to have severed relationship, and that began the gradual collapse of all the businesses, what MM has found out now is that the landlord-Lanre refused to renew the rent for all Folake's business, so at the expiration of her old rent, she had to move out, so all the 3 places-eatery,club and boutique have been shut down and everything packed out, people have not seen Folake in quite a while, some are even speculating that she might have relocated,while others says she has only gone to rest abroad for a while. But the former joint is going through a total overhauling right now, and we hear Lanre might be planning to open a first class joint at the former Aqua 27, which has now gone defunct.
Posted by maestromedia at 9:50 AM

aloba, try and reorganise ur blog it really gets annoying navigating through it, thats why u dont get too many pple commenting on the news u put up, try and keep the pictures close together and the dark background makes u want to get off the site quickly, a brighter background like white will make pple stay on ur blog and consequently drive traffic here, and please dont make the pics too far apart, it gives a headache! try and rectify this to increase popularity of ur blog and turninto a money spinner!

folake was never out there ....she was a business woman with a focus..may God help her all the way and time will tell

problems with sleeping with a LOSER. Lanre Nzeribe is a loser

Lanre Nzeribe, a loser, i dont think so. u guys need to refer to a dictionary.

Lanre Nzeribe, a loser, i dont think so. u guys need to refer to a dictionary.