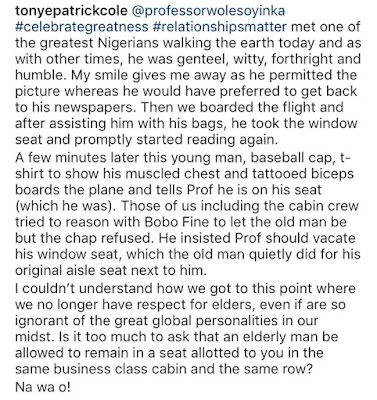 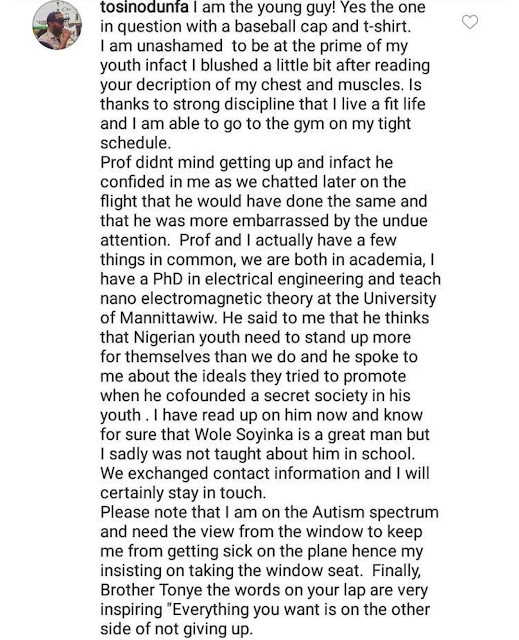 Tonye Cole is the recent APC Gubernatorial Aspirant who had fought an unsuccessful battle so as to vie for the Governorship of Rivers State at the last election. He is also one of the co-owners of Sahara Group a big player in the oil and gas sector of the economy. He had written very recently, the above narration of an event he was a witness to on a flight in the business class section of the plane. And the story involved the well respected Nobel laureate and literary giant Prof. Wole Soyinka.

To summarize what he had written that has since caused a whole lot of hoopla. Tosin Odunfa another passengeroon the sane flight had come on the plane in the business class section to find the renowned Prof. on his assigned seat and he had insisted on sitting on that seat by the window. Apparently the good Prof. understanding that that wasn't his allotted seat in the first instance, had gotten up quietly  for the much younger man to take his seat. In the whole process of the brief engagement, Tonye Cole was a 3rd party who only just witnessed or had observed what had ensued between the dude and the Professor which he later wrote about as he felt he saw it. Maybe the premise of his write up was the need for our youths to be respectful to the elders no matter what. Atleast as dictated by our understanding of our traditions and culture. Which says in all situation and circumstances, our elders are always right no matter what.

In the write up, he somewhat portrayed the young man as being rude, especially to a renowned Nigerian of the status of Prof. Wole Soyinka. In Tonye's write up, which many read and via which many took sides for or against the young man. TONYE COLE only insinuated that the young man was rude for demanding his right, he didn't come out categorically to say the guy was unruly or misbehaved in a bad manner towards the Professor. If you read the write up well, you would see that in a way the dude, because of his fez cap and maybe buff body and tattoo, he was already profiled somewhat as a bully and would most definitely be rude. Now after so much hoopla over what must have gone wrong. The guy who was majorly in the thick of what actually happened has responded, and in fact pooh-poohed the assertions made by many about what actually transpired.

His reaction as he stated it are above in one of the screen-shots, just like the actual write up of Tonye too is above too. If what Tosin Odunfa actually wrote is how the matter happened then, Tonye Cole might have reported an inaccurate description of the matter, which has put the young man in disrepute. So now, it's Tosin's words against Tonye Cole's!!!! The only person that could have verified the real truth of the matter and lay things to rest accurately is the eminent professor himself. And would he for any good reason come out to make things clear as it accurately happened? We doubt that. But the lesson to gain from this whole saga majorly, is about the need for restraint on all sides.

Tosin claims he was polite in his demand. And also that the Professor didn't have any problems with getting up from the seat to take his own actual allotted seat. He even claims his wanting his allotted window seat was for health reasons. He in fact spoke well if not glowingly of not just the Professor himself, but also of Tonye Cole, whose report of the matter caused the hoopla in the first place.

Many have called the young man-Tosin Odunfa various names without even giving him the benefit of the doubt. In fact some if they met him on the street could have attacked him verbally or otherwise over the matter. His problem was the effontery to have demanded for his seat. The same effontery that made Prof. and others many years back to have founded the Pyrate Confraternity to fight against certain things they didn't like.

A curious question though from us is, did Tonye Cole at any point, intervened at all in the matter to at least calm frayed nerves or to even help make the young man see reason to apologize if he was perceived to have done something wrong? To have just allowed him to go away without letting know the bad he might have done also, meant Mr. Cole didn't do a good thing too. Reason for that majorly is that, maybe he could have assessed accurately by that particular intervention, whether Tosin Odunfa is just a rude person by nature or not.

So in the light of all what has come out now, whose truth is more accurate????

Posted by maestromedia at 12:44 AM

But from the look of things, Tonye was taking selfie from a window seat. Pray tell - why didn’t he respect his elders and volunteer his seat? Radarada. I’m pissed at his depiction of me Odunfa as a miscreant just by looks only when in actual fact the guy is friggin PhD holder. I’m also pissed when Mo Abudu joined the chat to spew rubbish. These two are nothing short of bullies.

Or the Stupid Mo that cursed the guy. She should be cursed first for all the atrocities she has committed.

Good on Tosin for replying.

My Yoruba friends do say older age is for riding the younger ones. That's the scenarios now.

And you wonder why we have lost it in this country? These children are something else!!!! Pray to reach profs age and be respected. Haba