For the sake of decency, we have decided not to publish the pictures the way we got it and have decided to cover all the vitals and even part of their faces. We are quite sure you are still wondering what we might be on about. 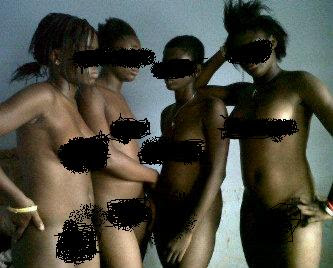 Lastnite we got a picture, that showed 4 supposedly young, Nigerian undergraduates, said to be students of a Federal University in a state in the middle belt part of Nigeria. We are quite sure you are still wondering what could have been so outrageous about the 4 students! The 4 were supposedly caught while engrossed, excitingly devouring each other’s erogenous zones in erotic bliss, so far gone in the act were they, that they didn't know when someone walked in, in shock at the scene before her, the unwelcome intruder raised an alarm which attracted other students and the 4 ladies were paraded shame-faced before all in the NUDE!!.


We have had to debate if under the law, that the action taken by their other colleagues was right, some have had to say that ''the ladies human rights were grossly violated, that under the law, they all have the right to do what pleases them, many even went as far as saying that to each his/her own. Whatever it is that gets you excited is your right.

Others who are advocates of Morals are in the opposite, many are of the opinion that lesbianism is a dirty act that God frowns on, and so they feel that the right judgment was meted on the 4.

On which side of the divide are you ? What's your candid opinion?

Posted by maestromedia at 10:54 PM

I think Nigeria is fucked up. If the girls want to have sex with themselves they should let them be. What a hell kind of nonsense is this. Its either they are raping innocent girls or stripping them naked.

I also think you are fucked up for even asking the question you are asking.

YOu should be asking why there is a huge gap between haves and have nots in our country or why our educational system is in a diseased state as it is now.

But you are wondering why a group of girls who chose to enjoy themselves without hurting anyone should be hurt.

That is what is fucked up.

I'm frustrated & disappointed by the state of education in the country. Our justice system is appalling. Why should anyone male or female judge someone else & be able to portray it in such a degrading manner? What/who gives you the right?

Maestromedia you shouldn't be asking that question, but instead "why is it allowed in our society to degrade & humiliate people, especially women?" why in this day & age with so many problems & hurdles in our country do we still have the time & energy to focus on such?

Where the girls hurting someone? The biggest argument will be "God frowns at such act", well, unless the abusers are God, they need to sit their asses down & go on with their little lifes. And the let the man in the sky do the judging.

The girls were behind closed doors abi? Who or how they fuck is nobody's concern as long as they don't do it in public. Abiola shame on you

I am thoroughly embarrassed by this. Who's business is it what these ladies were doing? Is it against the law? Did they commit murder? Did they molest a child? What could possibly justify this kind of treatment? Im totally miffed!!!
At this rate, i guess we should be glad they weren't set on fire. I can bet with my life that they were thoroughly beaten up as well.

Shame on the people that did this.

this is what u get when u have semi literate people as journalists with no exposure, bush rats!

anon fool 3:02, its obvious that you are one of those in the pics or maybe ur mom!. Some posted a story to get people's attention, so that people can make a change, but idiots like u go around calling ur family illiterates. What if the blogger had posted the picture the way it was sent to them.

@ anon 3:53, aloba pls stop sending anonymous messages oooooooo! go and learn how to write properly please! backward illiterate goat! all the bribe u have been collecting from all these lagos girls u blackmail is whats making ur stomach swell! bloody cheap hustler