PROPERTY MAGNATE EXTRAORDINAIRE OLU OKEOWO TAKES DELIVERY OF A ONE OF A KIND AUTOMOBILE THAT LEAVES OTHERS GAPING IN WONDER. A STUPENDOUS BIRTHDAY GIFT TO SELF.

*Car estimated value is about ₦200 million plus.

*It was a birthday present to self by the car buff extraordinaire.

*His awesome garage is valued at about $3 million Dollars that's more than a billion Naira.

*His palatial home is valued at about ₦4billion Naira and took 11 months to be ready.

*Palacio de OKEOWO in Parkview Ikoyi is the biggest and most intimidating property of its kind there, bar none.

*The garages for the cars are specially appointed.

*Sir Olu Okeowo, the property czar, construction magnate, philanthropist extraordinaire, husband, father is in a class of his own.

*He owns quite a collection of Rolls Royce estimated value of more than a $1.2 million plus dollars.

*He was the only African invited to a Rolls Royce owners gathering last month.

Respected property czar, the Inimitable and indomitable colossus of a man, who is the Chairman of Gibraltar Construction, Sir Olu Okeowo, 52 has done it again!!!

The sumptuously liquid man, some claims billionaire many times over, who is known for his one of a kind edifices and his parade of stand out automobiles, took it a notch up, only a few days ago. 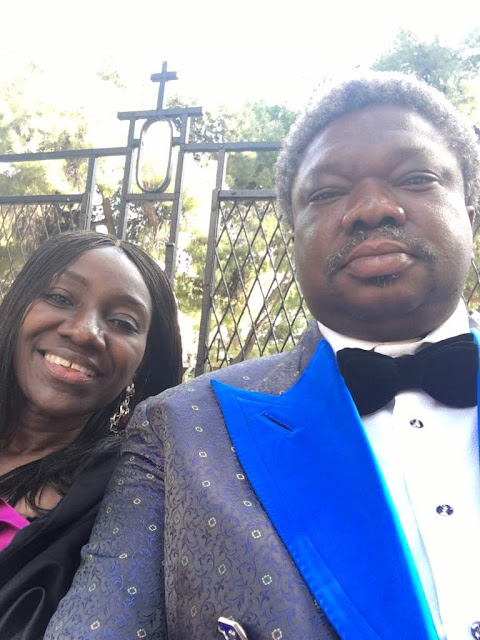 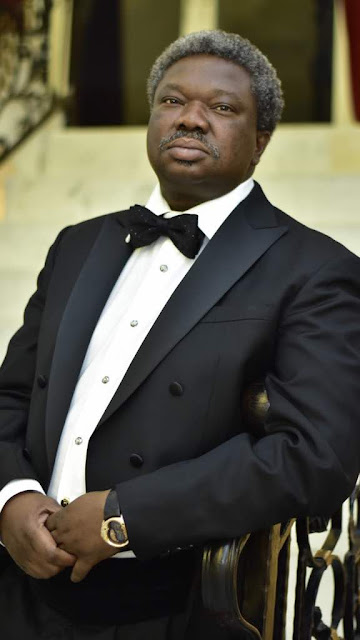 He only recently (7 months ago now-December 2016 to be more precise) moved to his humongous Parkview palatial home, known to all as the "Palacio de Okeowo", which still induces gasps from all and sundry who has seen it, for the sheer opulence.

That property is conservatively valued at about ₦4billion Naira, land was bought for ₦1billion Naira and building built for ₦3billion, the edifice that we start describing from now till tomorrow is said to be a copy of one the most decadent and luxurious French palaces.

The white 3 floors Victorian styled building overlooking the sea at one part, is said to be the biggest property of its kind bar none in Parkview, Ikoyi, Lagos area. What that means in actual fact, is that it has 'dusted' the former number 1 biggest one said to be owned by Musa Danjuma, younger brother of General TY Danjuma retired. Imagine someone sandfilling and claiming a good 5000 square metres of the sea to add to his land to build his property! The building took all of 11 months for it to be ready. The gargantuan edifice is built on 5 acres of prime land.

This house which can stand side by side with any from any part of the world, has all the comforts that money can buy. It is stupendously cladded with marble in and out. The penthouse's view can take one's breath away as it overlooks the sea on one part and the stupendous view of Parkview on another part. It came with its own helipad, jetty and 40 seater private chapel, where the angels themselves would attest to the upscale taste of the owner of the property,  the place is called "Solomon's Chapel of Faith, named after the avowed wisest king of all to have ever lived.

The facilities are 5-stars to 7-stars all the way, from the Lawn Tennis Court, to the Basketball Court, to Olympic Size Swimming Pool. It is a 16 room wonder of opulence that other confirmed rich men, admire and pray to be able to build too.

Fountains and figurines of Roman era mythical characters share space all over the expansive compound. Everything is super well appointed and detailed. Obvious attention to detail is noticed everywhere. From the gargantuan pillars to ornate doors etc.

Sir Olu Okeowo, just clocked 52 years old, just a few days ago and the dazzler of mean repute tickled every one's fancy all over again last week, in a way and manner they hadn't been tickled of recent, when his standout, dual toned chariot of an automobile landed with much aplomb and razzmatazz!

The car is a special one by all ramifications, one that was made to strict specifications for him. It even has a special number plate.

From the little information we could garner, there are [only just 50] of the cars made in the whole world and one of these special cars is owned by the property Czar and exemplary philanthropist, Olu Okeowo.

That the Knight of the Anglican church (John Wesley Church to be more precise) is a car buff, is like saying he eats food and drinks water. His extraordinary garage speaks "hyperbolic volume", of how far gone his love for special machines​ goes. He has in good numbers some of the best ones money can afford.

Just imagine one man already owning 6 out of this world Rolls Royce. We hear that Sir Olu Okeowo was the only Nigerian and probably African that was recently invited to a special gathering of Rolls Royce owners held just last month, May of 2017.

Apart from the many Rolls Royces, which would have set him back by a few million Pounds or Dollars, (6 Rolls Royce at an average cost of $200000, which is just starters would total a whopping $1.2 million Dollars), this wealthy property owner, also owns a few other, talk of the town automobile likes of Range Rovers, Mercedes Benz G Swag, Bentley and other gasp inducing range of cars. All of which are specially parked in their own, well air-conditioned homes (garages) to keep them in the best atmosphere and conditions.

The value of cars in the garage(s) of this "philanthropist par excellence", who we hear doesn't play with anything that has to do with God, we hear can be as conservatively valued as $3million plus, that's close to ₦1.2 billion Naira, if not more.

Someone we know who is also very liquid spoke of Sir OKEOWO in awe and very hyperbolic terms saying, he is in a class of his own. Quoting the person, the dude said "Mate knows their mate", this dude is world's apart from many.

This newly arrived baby, for which we heard a red carpet was set up to welcome it, is in a class of its own and most definitely takes the cake. It is valued at several hundreds of thousands of dollars and it is intimidating by all standards.

The car in question is a "Bentley Mulsanne Extended WheelBase Limited Edition", of which only 50 were made, Olu Okeowo's own been the 13th one in the series. Meanibg he his one of the 50 envied owners of such a car. The car is a 2-tone wonder (better referred to as dual tone) masterpiece, with the top a bronze goldish colour and body part grey-silvery colour. The Blue 2 tone colour of the Mulsanne range was bought in March 2017, by Davido's dad for his birthday, only that it's not a limited edition extended wheel-base super car like the Okeowo's type.

The "Bentley Mulsanne Extended Wheel Base" is the most comfortable and luxurious of the Mulsanne range. It offers first class air-travel experience on road. It is said to be the "new benchmark in comfort and refinement", moving from 0-60mph in 5.3 secs.

Truly when you are big, you are B.I.G!!! And for the man whose surname "Okeowo" loosely translates as 'carer of money' "lord of money" or better put "Custodian/owner of Wealth" he is totally and totally in an esteemed class of his own.

Salute to the "Generalismo in the field of wealth". Like someone rightly said, it is not about having the money and you be rated as rich this, rich that, it is about you being able to spend it! So can you do like Sir Olu Okeowo?
Posted by maestromedia at 1:15 AM

Aloba this guy is not 52 ooo.. Is it becos he turned himself to an old man overnight??? Or becos he has slept with a lot of older women who don't know his true age??? This guy was born in 1971... I'm sure he paid u peanuts for this writeup bcos I know for sure he's a sting bugger.. Or maybe he didn't and ur just looking for his attention

Abeg, lol he was bragging about this Rolls Royce event to his friends..meanwhile TA house by the waterfront on banana island is breath taking ;) can't wait for the launch in December

VANITY UPON VANITY. AT THE END OF THE DAY, IS ALL 6 FEET

lovely wife..another publication says he is 47..so which is it??..again on which road are these expensive cars being driven to