The forthcoming wedding ceremony between Afrotastic Diva- Gift ‘Muma Gee’ Uwame and Nollywood Actor- Prince ‘Eklips’ Eke will be an elaborate triple celebration.
The first would be a 2 part Traditional wedding ceremony on Tuesday, December 20, 2011. Starting at 10am, Muma Gee’s hometown of Odiabidi, Upata Kingdom, Ekpeye Land in Ahoada East LGA of Rivers State would witness the first Traditional Wedding Ceremony. This first ceremony will be the final stages of the Traditional Wedding Ceremony which began in that town in 2010. It would be held in the compound of Dr. Ukachukwu John Uwame.
On that same day, at 4pm, the compound of Chief Athanasius Nwankwo Eke in the town of Umuota Umuhu, Ngor Okpal Local Government Area of Imo State will come alive as the wedding party would land there. The joyous merriment is expected to continue far into the night. 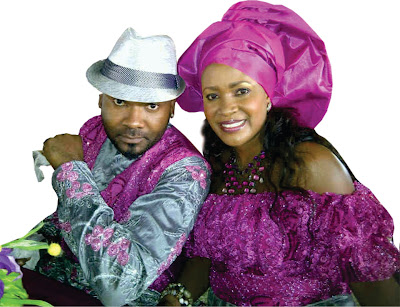 The White Wedding would then come up on Friday, December 23, 2011 in Port Harcourt at the Recovery House, 36, Uyo Street, Off Stadium Road by Bereton School, Port-Harcourt, Rivers State.  The officiating Pastor will be Reverend Ugochukwu Unachukwu.
The Invitation Cards containing details of both the Traditional and White Wedding have already started going out to friends, colleagues and well wishers.
While the excitement about the weddings continues to build up, Muma Gee is putting finishing touches to her upcoming album. Work on the new album has reached a crescendo and a release date for the album launch next year would soon be out. The first single, “Port Harcourt is Back,” has been released and the video, directed by her husband, Prince Eke alongside Ak-One and Frank Macaulay, a renowned cinematographer was shot a few weeks back across locations in Port Harcourt.
You can follow Muma Gee on Twitter: @realmumagee
Or facebook: facebook/mumagee’s fans
Posted by maestromedia at 11:57 AM