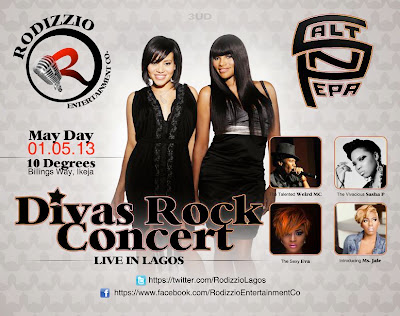 Just like we told you some days back. We can now fully confirm to you all that , that late 80's/90's rap trio, Salt 'N' Pepa with or without Spinderella are most definitely heading to Lagos, Nigeria, come Wednesday, May 1, 2013. The Concert is tagged ''Divas Rock Concert.

They are, undoubtedly, the group that changed the face of hip-hop as we know it. They also gave females across the globe a voice within their communities and the music industry as a whole. They are Salt- N-Pepa.
Twenty five years into their career, they continue to aspire to great heights with history making firsts.

Not only were they the first female rappers to receive a Grammy, but they were one of the few select rappers to have the distinct honor to ever perform on a very special episode of The Oprah Winfrey Show titled, "Rock Goddesses of the 70s and 80s" during its history-making run.
And now for the first time ever on the African continent, this Iconic group that revolutionized, like none other, the hip-hop scene, will be in Nigeria come May 1st 2013 to perform at Rodizzio Entertainment Company’s “Divas Rock Concert.”

This concert like never before will feature an all-female ensemble. Our very own Vivacious Sasha P, Sexy Eva Alordiah, Talented Weird MC and Captivating Ms Jaie will be there to rock the house!

This concert of concerts promises a live performance of the All Stars’ (Naija Remix) of “Push It”, a Salt n Pepa hit song. Look out for its release on iroking.com and other media within the coming weeks.

Posted by maestromedia at 11:14 PM

Wow! This is so cool, I realy love them. I'm def. Coming to this concert

Yaay! I love, I love, I'm not missing this