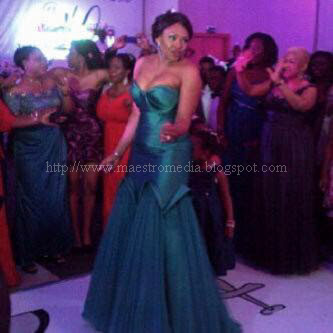 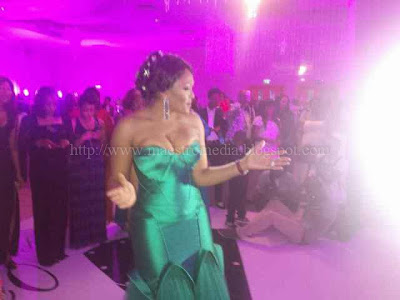 One of the most skillful players to have played football in the world, in the person of Austin ' Jay-Jay' Okocha, the mercurial dribbler, Bolton FC & Super Eagles legend didn't seem to mind the cost of throwing a very lavish 40th birthday shindig for his gorgeous wife at the weekend.

FULL DETAILS AFTER THE BREAK. PLS CLICK ON READ MORE BELOW

Date of the party was Saturday, October 25, 2013, venue of choice was the main hall of the Civic Center, just directly across the road from the 1004 Estates. It was a black-tie dinner kinda setting. Event though sponsored by Jay-jay, but the planning & coordination was done by Uche Nwadinson, Nkechi Okocha's younger sister, who owns the very well known event's company 'Franicoles'.

For those who had the privilege to attend the A-class shindig, they exclaimed that it was lavish in all ways that one wants to think about it. There was the over abundance of all those things that makes parties of this caliber A-class, nothing in terms of fun & entertainment was lacking.

On the bandstand to entertain the guests were Kaycee who sang his famous 'Limpopo' song to the delight of everyone. It didn't end there, as there was also the waist twister extraordinaire 'Flavour Nabania', not still stopping there, the rave of the moment, the young man called Ayo Balogun but better known to the world as 'Wizkid' as usual was the toast of the happy crowd. He performed his new hit song 'Caro' and got plenty of the crowd input. It still didn't end there, as the Chief Creative Officer of Empire Mates Entertainment in the person of Bankole Wellington aka Banky W also performed; His was rather special as he performed a duet with the eldest daughter of the couple. Men!!!!!!! The young lady is already as tall as her mama & even more beautiful, she's also a good dancer.

The delectably gorgeous birthday gal Nkechi was the cynosure of all eyes in her beautiful sea green outfit, showing off those twin mounds that some have suggested has gotten some form of 'pampering' of late wink wink. Apart from the outfit, the rocks(diamonds) on display in the form of diamond ring & diamond encrusted watch could easily blind the eyes.

Though there were many highlights of the event, the one that left everyone totally gobsmacked was the presentation of birthday present by Jay-jay to his wife, the gorgeous gift wrapped delight was a brand spanking new (tear rubber) White Mercedes Benz G-Wagon (eat your hearts out) with chrome rims). The beautiful gift brought to fore the very emotional & very appreciative Nkechi, who went down on her knees, expressing her heartfelt thank you to her husband for his love & support in front of everyone.

It was a very well put together party like we already said and everyone who came had their fun. Curiously none of the football playing mates of Jay-Jay was at the party. Most of those that attended were more of Nkechi's 'friends', especially the females. Even a very very close female friend of hers based in the US was around at the party.

People at the party were openly estimating that the party & gift must have set back the retired Captain of the Super Eagles by about N28 Million or more. To us we think it's good money well spent, if you really appreciate your wife, knowing very well her incredible contributions to your life.

Anyways from us at MM. Happy belated birthday Nkechi, many more years of Grace & happiness for you & yours.
Posted by maestromedia at 10:06 AM

Nice one, but where is the tall daughter's pix?

still don't get it ooh, when was her actual birthday? but 25th was on a Friday not Saturday according to ur write up.

This is good. Big Congrats to her.

Happy Birthday to u

Maestro go delete the comments. So no need. Make i go SDK

comments are rolling on dimorkus page
if comments r not coded, Aloba wl not post moreover he is Jayjay's paddy paddy