AND WE HAVE LOST OUR FRIEND EMMANUEL BABATUNDE BAMIGBOYE. AS HE DIED IN HIS SLEEP IN LONDON. 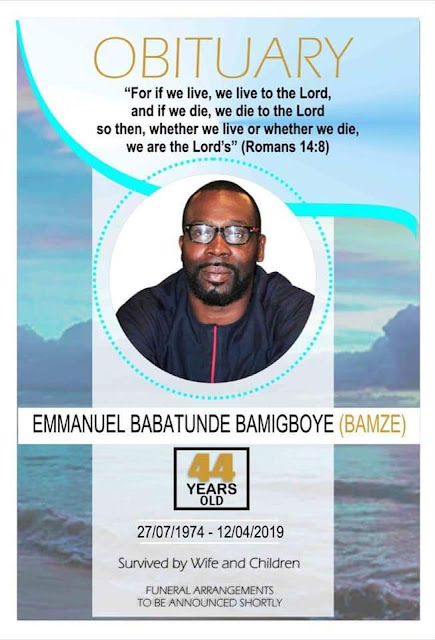 What can we say? Fact is, we are actually lost for words and that's just the truth. We have tried to rationalize it, that maybe it was for the best, but how can the untimely death of a 44 year old, seemingly healthy man be easily explained & be for the best? How does one go to his family to say sorry? What kind of sorry is that? That nuisance called death just did her worst again, leaving tears and anguish in her wake. What a shame!!!!

Bamze is gone leaving his beautiful and very loving wife Tosin and her 2 wonderful kids behind only to hold on to memories of the great and wonderful times in past. Now all their hopes are seated on God strictly, as the man of the house is gone forever, at least till the day of his resurrection.

What a sad loss!!! But why Bamze? Why did you yield so easily? You could have at least fought much harder, if not for anything at least for the sake of the many many that loved you. You looked strong so strong like the Iroko or oak tree while alive. Your height of 6 ft plus and your booming voice could be intimidating, but you were a gentle giant of a man.. But alas, you giant yielded and some would claim that it was peacefully in your sleep, due to cardiac arrest! What a loss!!!

Our paths crossed several years ago at the University of Ilorin, Kwara State. You were the tall, handsome, cool dude who was always very well put together and was always good fun to have around. Knew your brother Victor long before we met. Had heard about your brother Femi Mora, who was a known stylish dude of that time, so when you came one had expectations and you didn't disappoint at all. I remember jamming you again by chance in London at that restaurant where I had gone to pick up my abula (amala and ewedu plus gbegiri), you were still yourself even as prior to that time I hadn't seen you for a very long time, since we left Ilorin and you relocated to London.

Emmanuel Babatunde Bamigboye adieu. It was only just late last year that your dad, who was the 1st military Governor of Kwara State, Retired General Theophilus Bamigboye passed on. Now after just 5 months or so that he was buried, you too has gone on that journey of no return. You would be sorely missed oooooo. Your kids Zabethy & Bolatide would miss you loads.

Bamze's remains would be buried in the next few weeks in London as soon as his family agree on a reasonable date. We would just want to use this opportunity and medium to commiserate with his entire family members, friends and colleagues. May the soul of the dearly departed find rest. And may God give all and sundry, the strength and fortitude to bear this untimely loss.

Salute Bamze!!
Till we meet again on the day of your resurrection.
Posted by maestromedia at 2:54 PM

It’s really painful when young people die. Heartbreaking for his family with yet another loss. Sleep peacefully.

Death, you decided to turn a wealthy home desolate !!!
O Death, where is your victory? Where is your sting ?
Why did you choose to cause so much pain in especially Tosin and her children's heart ?
You chose hours when you were so sure Bamseh wouldn't have been able to fight back or get help! You took him away without notice , you deceived his wife and kids into bidding him good night and you turned it into good bye the next morning . How more deceitful and calous could you have been? You left most of us in puzzles , but that is so typical of you anyway . O ma se o Bamseh !!! Sun re o

Very sad and painful exit of a dear brother.Rest in peace bro and may God comfort your wife,kids and entire family.Amen

May his gentle soul continue to rest in peace and may God grant the family the fortitude to bear the loss. Adieu Bamze.
TN

May his gentle soul continue to rest in peace and may God grant the family the fortitude to bear the loss. Adieu Bamze.
TN

Awww RIP and may God comfort the family.

Sad to hear of young people's death. May his soul rest well.

And Aloba claims he knew him very well. Rip.

So sad that unhealthy life style is killing many younger vibrant men,heart attack.. Is very important to stay active because they human heart is 80% muscle which pump blood in and out which tend to get WeaKer as we age but Hit excercise improve the heart muscle.

Aloba has been forming familiarity since 1800 bc,ass kissing swine

@anon 10.11am may you remain anon for life, spirit, soul and body. Claiming familiarity with who ooooooo???? Especially the late Bamze who was my junior in school and who has never offered me anything in life? I was at least 2 years ahead of him at the university and knew his brother before I ever even met him in Ilorin. Or who are these your nitwits that you claim I ass kiss? It's obvious that your little brain is in recess and for it to function well or again at all, it needs a bit of slapping around to rejig it! Do you ever in your anonymous life think I want to be like any of these your kind of people? That I write about them in the 1st instance is a function of doing a job and doing it to the best of my abilities. Loads of the time, I write tongue in cheek to expose. If I say I know anyone, be rest assured I do and do well. Do you know how many of these your people beg and ask to be written about or profiled? Do you know how many of then I tell not to let anyone know I know then? Do you think I am one omo alai niran like you? Please please please. If you are sure of your background and where you are from and who you are, try for once to reveal who you are and let's bring it on board.

My principle in life has always being about slow and steady wins the race. I am not and have never in any way being intimidated by anyones status or place in life, never ever. But I beg you please. If you are so sure of yourself, just reveal who you are and let's get it on. I had like to come after you!

It’s an obituary and a reflection about your friend. Wrong place for all of you to have a go. A young man has died and all of you are going off about famzing. There’s more to life than famzing. Please ignore some things.

Please please abeg, even oyinbos that exercise and do all the healthy stuff develop ill health. It is NO GUARANTEE of anything. Simply say RIP amd move on.

Mr Aloba, pls you're too big for this. Even if you want to prove your integrity, it shouldn't be under an obituary post.

I've known you since you were on the case of my late aburo - Nike Ewar. And I've always liked your charisma and integrity. Pls don't disappoint me.

This the most painful way because it very sudden and shocking

Why mention wealth . .... is that relevant or should death have made only a poor home desolate

8:56 It's a Yoruba proverb that Boyo translated verbatim to English. Please let's all calm down. A family is grieving. Peace.

I am now convinced that ‘they’ must have told Linda ikeji never to reply comments no matter how badly provoked, or else her money will vanish. She is the only one who NEVER replies in her comment section. The kind of insults she had received through the years! Don’t know how she does it but Aloba and SDK need to start ignoring irritating comments.

Rest in peace Bamze. What a life...