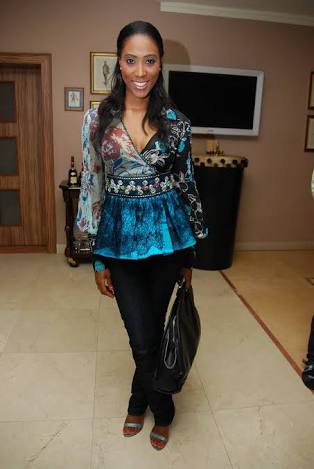 The speculations about Funke's pregnancy is already rife as per the current status or is it situation of the newly married "Mrs. Olufunke Leila Aig-Imoukhuede" nee Fowler.

Those who claim to have the  understanding of the tell tale signs of upcoming bambino(s), are already spinning the tales as we speak, but we are not too sure if it is tales by moonlight (hocus pocus) or if it is the one by sunshine (factual). But their claim is that madam has eaten the bug and that the countdown towards a summer naming ceremony has quietly begun.

If the unconfirmed speculations are later proven to be as accurate and correct as predicted, then we would greatly commend these gifted seers of incredible and uncanny abilities, who are able to just scrutinize people and see clearly what others don't see, but if they miss the mark, then their alleged 'extraterrestrial prowess' would have proven itself to be nought then and just based on the game of chance & imagination.

But whatever it is though, the prayers of everyone, most especially those of the immediate family members on both sides and friends of the couple, is for Aig the younger, a skillful marksman in the mold of Cristiano Ronaldo that's referring to Aigboviobiose who is one of the latest husband in town is to show that he is a "sharp-shooter extraordinaire", one with the 'uncanny ability' to shoot straight and as accurately as possible to hit the 'main target'. How sweet and gorgeously pleasant would that be. So that by August or at the latest December of 2019, the bambino or would it be bambinos (2 or 3 together) would just arrive to a life of fun, fawning and enjoyment!!!

Congratulations in advance to Funke and by extension her husband.

Who else agrees with me, THIS SHOULD NEVER HAVE BEEN A POST! Highly unnecessary and an invasion of privacy. This is absolutely unnecessary. What else is expected? Please do a post on brexit if there is nothing to post ! Drops 🎤

This woman is pretty! Can't call her girl! No fat transfer! No surgery ! All natural! Congrats to a beautiful woman! May your home be blessed and filled with beautiful kids, Amen.

Awww congrats dearie. You made the right decision! Believe me!

May you enjoy the blessings attached to marriage IJN ,Amen. Such a pretty girl.

Is Funke an only child? I've never heard the mention of any siblings.

I wonder what His sister thinks.
Funny how people in ministry have family members that do the opposite.
You teach abstinence to young women but have a brother who doesn’t practice what you preach and Funke who was already pregnant before the ceremony.
Well done to all of you!

Congrats! I wish you a safe delivery and a life of happiness as a mother and wife.

Lol @do a post on Brexit. There will be a few comments or no comments.

@only child? Only girl I think with some boys.

Anon 11.59 you must agree that enough has been said about this Funke girl! This post was not necessary. Really. I don’t like issues being ‘overflogged’ . Her wedding post is enough! 🙄💅🏻

I agree... this post is over kill. Let her be

Who is preaching abstinence in 2019?


Won’t you sample the good before you buy?

What is overkill?? You folks should go on a news blog for news about Brexit. This is a gossip blog and Aloba being messy and most especially about his disappearance act need this more than the air that he breath