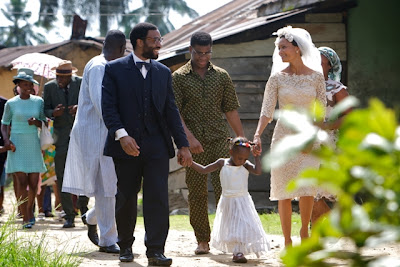 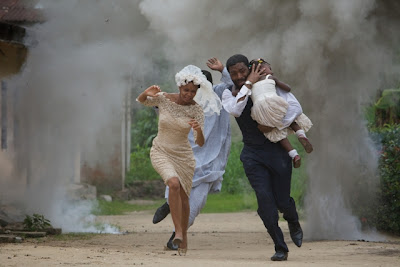 Half of a Yellow Sun, the highly-anticipated film, had its world premiere at the 38th annual Toronto International Film Festival (TIFF) yesterday, Sunday 8th September 2013, at the Winter Garden Theatre, Toronto, Canada.


Half of a Yellow Sun’s premiere at the prestigious TIFF, is a particularly momentous occasion for Nigeria's booming film industry. Yesterday's event is the first ever red-carpet screening of a Nigerian film at a leading international film festival, and is a befitting debut for the sensational, one-of-a-kind, iconic production.

MORE AFTER THE BREAK. PLS CLICK ON READ MORE BELOW

The British-born Nigerian actor, Chiwetel Ejiofor (star of Inside Man, American Gangster, 12 Years a Slave), and Thandie Newton (star of Crash, For Colored Girls, The Pursuit of Happyness), led the cast of Nigerian and international actors to the festival. Anika Noni Rose (Dreamgirls, The No.1 Ladies Detective Agency), John Boyega (Attack the Block) and top Nollywood actors Genevieve Nnaji and Onyeka Onwenu were also scheduled to attend the premiere.


Based on the award-winning novel by Nigerian author, Chimamanda Ngozi Adichie, Half of a Yellow Sun is directed by prolific UK-based Nigerian playwright, Biyi Bandele, and produced by Andrea Calderwood (HBO’s Generation Kill, The Last King of Scotland: winner of three BAFTAs and an Oscar). The British/Nigerian co-production was shot at the Tinapa Film Studios in Calabar and in London.


Set in 1960s Nigeria, Half of a Yellow Sun is an epic love-story weaving together the lives of four people swept up in the turbulence of the Nigerian civil war.  The sweeping romantic drama chronicles the lives of Olanna (Thandie Newton) and Kainene (Anika Noni Rose), two glamorous twins from a wealthy Nigerian family.


Returning to a privileged city life in newly independent 1960s Nigeria, after their English education, the two sisters make starkly different choices back at home. Olanna shocks her family by going to live with her lover, the “revolutionary professor”, Odenigbo (Chiwetel Ejiofor) and his devoted houseboy Ugwu (John Boyega) in the dusty university town of Nsukka; while Kainene, once the rebellious tomboy, turns to business, and proves fiercely successful at it.  Kainene surprises herself and the family even more by falling in love with Richard (Joseph Mawle), an English writer.


Preoccupied by their romantic entanglements, each desperate to navigate the fractious politics of the day, the relationship between the sisters turns sour as betrayal tears them apart.  The sisters become victims of the civil war that threatened to divide Nigeria in two and pits the world in polarised halves.


Half of a Yellow Sun will take the audience on a beautiful journey through the war-time lives of these beautiful women in a powerful, at times horrifying, and, as the response of readers around the world has shown, intensely emotional experience.


Half Of A Yellow Sun won the prestigious Orange Prize for Fiction in the UK (2007) and was a finalist for the National Book Critics Circle Award. The novel has sold over 1 million copies worldwide, and has been translated into 30 languages.


Established in 1976, the TIFF is the leading public film festival in the world, screening more than 300 films from 60+ countries every September. The 38th annual Toronto International Film Festival (TIFF) runs from September 5 to September 15, 2013.

Posted by maestromedia at 3:18 PM

Email ThisBlogThis!Share to TwitterShare to FacebookShare to Pinterest
Labels: ENTERTAINMENT AND LIFESTYLE, HALF OF A YELLOW SUN, MOVIE AND ENTERTAINMENT, MOVIE PREMIERE, TIFF, TORONTO FILM FESTIVAL

I'm probably the only one who hasn't read the book. A short cut for me will be to watch the movie. Can't wait.