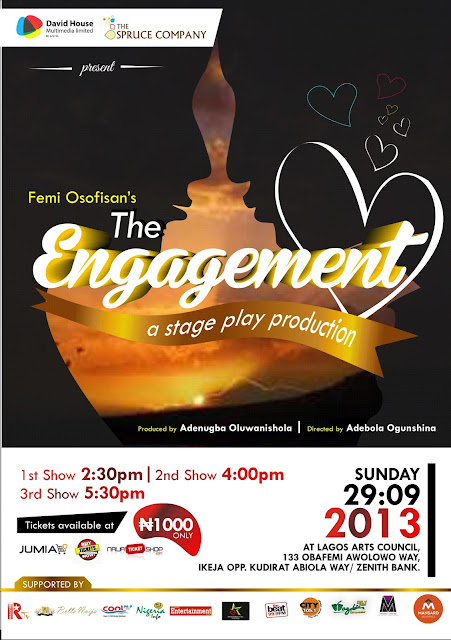 The ember months, September – December, as they are often called, promises to be great fun as the Lagos State Council for Arts and Culture (LSCAC) partners Davidhouse Multimedia and The Spruce Company to present five amazing plays under the aegis of the Live Theatre on SundayTM Fall Season productions. Under the partnership, LSCAC will host all the Live Theatre on Sunday at her theatre facility located at 133, Obafemi Awolowo Way, Ikeja opposite Kudirat Abiola Way /Oregun Junction and next to  the Lagos Printing Corporation Business Complex.

Davidhouse Multimedia Limited started the repertory project, LIVE THEATRE ON SUNDAY in April, 2008. The series has featured notable talents in the Nigerian entertainment industry including Yinka Davies, Gabriel Afolayan, Matse Uwatse, Igos, Omonor Somolu, Ego and many others in productions such as The Midnight Black out, J.P. Clark’s ‘Song of a Goat’, ‘The Wives’ Revolt’, Ola Rotimi’s ‘Our Husband Has Gone Mad Again’, ‘Grip Am’ and most recently, Zulu Sofola’s ‘The Wizard of Law’ and Ola Rotimi’s ‘Man Talk Woman Talk’ in March and April, 2013.

CONCLUDING PART AFTER THE BREAK. PLS CLICK ON READ MORE BELOW

Plays outlined for the 2013 Fall Season series include Femi Osofisan’s The Engagement, Zulu Sofola’s The Wizard of Law, Ola Rotimi’s Man Talk, Woman Talk, Wole Soyinka’s Trials of Brother Jero and a new original pidgin piece, One Xmas Tori, an adaptation of the Nativity story. All these plays deal with the intricacies of human relationships and humorously explore its conflicts.

The production schedule is as follows the Engagement will happen on the last Sunday in September, 2013 (29.09.2013), the Wizard of Law will be staged on Independence Day whilst on Sallah Day, Wednesday,October 16, 2013, audience will be thrilled to Wole Soyinka’s The Trials of Brother Jero and on October 27, the last Sunday of the month, audience will get to see Man Talk, Woman Talk. Also the Trials of Brother Jero will again be savoured on November 24, 2013 being the last Sunday in that month. Consequently, audiences will be serenaded to the musical drama, One Xmas Stori, an original Nigerian pidgin adaptation of the Nativity story.

The productions which will be held at 2pm, 4.30pm and 5.15pm respectively on each production day will also feature live music and jokes by new favourite artistes. Tickets to the plays are presently available on Jumia.com, Ariiya Tickets.com and on NaijaTicketshop.com. There are also discounted bundles for group ticket purchase.

this is great, very good entertainment. wanna see this!