It was just a year ago. When it was launched on December 1, 2012 and it has gained so much ground and made the founder a multimillionaire.


iROKOtv, dubbed by media commentators as the “Netflix of Africa”  celebrated its first birthday 1st December 2012. iROKOtv is Africa’s largest online platform for streaming movies and has invested in building the world's largest library of Nollywood movies over the past year, owning licences to more than 5,000 titles. Lovers of all things Nollywood can watch movies, for free, 24 hours a day, 7 days a week.

Launched on 1st December 2011 by Jason Njoku, Founder and CEO of iROKO Partners, which also counts the popular online music platform iROKING among its suite, iROKOtv has grown rapidly over the past year, recording over 800,000 registered users in just eight months, who are tuning in from over 178 countries across the world. Since launch, iROKOtv has recorded almost 50 million plays.

Nigeria’s President Goodluck Jonathan recently said of the Nollywood industry, “these are the people who market this country positively in African countries and even outside Africa and even in the Caribbean, where they appreciate Nigeria because of Nollywood.” iROKOtv has played a crucial in role in bringing Nollywood to the global audience and, following an investment by US hedge fund and Facebook investor Tiger Global, iROKO Partners was able to open offices in New York and London, two of its largest markets.

Aside from transforming the way Africans and the Diaspora access Nollywood, iROKOtv is also changing the Nollywood industry for its producers by opening up a new revenue stream for them. Prior to iROKOtv, producers would find their movies online but received no payment for this and lost out on thousands of dollars. Now, they work with iROKOtv to license their movies and stream their content online legally.

Jason Njoku said “We’ve had an awesome first year at iROKOtv and we’ve got great plans in the pipeline for 2013, including adding more films to our library and growing our global audience. Our first year has seen us bring Nollywood to the Diaspora, whose thirst for movies seems unquenchable. Our biggest markets are in the West, dominated by the US and UK. However, in 2013, we will be focusing our attention back on Africa and figuring out ways we can bring this awesome content to new audiences.

"Our business is incredibly simple; African stories, by Africans, for Africans and we hope to continue this mantra for many more birthdays". 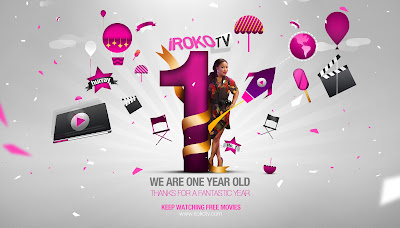 Posted by maestromedia at 12:46 PM