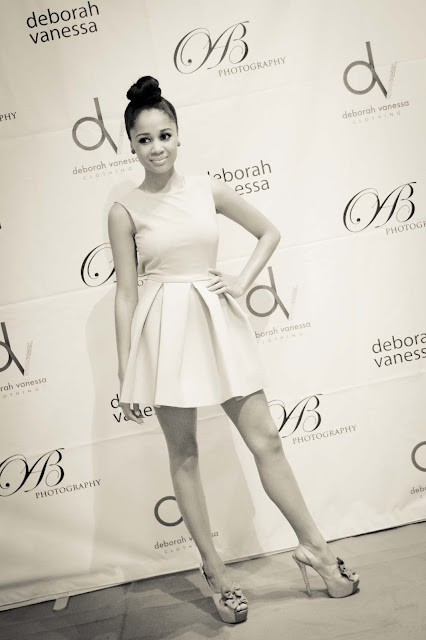 We met the very gorgeous and fantastically brilliant, Deborah Vanessa very recently. We had heard about how she had taken the Youtube by storm not too long ago. Having released a funny song titled- Uncle Obama, which had the lyrics- ''Uncle Obama, I love your banana'', the hilarious song not only went viral on Youtube, but also got the attention of CNN, as well as several media from around the world. We were so curious to know more about the author of the song, to the  extent that immediately we set eyes on her, we just had to have an interview done. The multi-talented, petite angel was all for it. It was a fun one, that also revealed much. So we thought to post our chat here for all to read. Here is a peep into the world of Sister Deborah- The hilarious artist, actress, designer and so much more......Enjoy! Uncle Obama's Banana video is found at the end of the interview.

You are one big sensation. We heard you are a big Youtube sensation, how did you get here?

I released a song I made with the FOKNBois in London titled Uncle Obama on July 15, 2012 on the net via Hulkshare. By September 15 the video I produced for it was ready and it was released on September 29 on the net via my personal Youtube account, Debrootz.

The video went viral after posting it on Youtube, getting over 150,000 views in four days and over 70,000 views in three days on World Star Hip Hop. After about three weeks, I was called and interviewed by Jeanne Moos of CNN and it was shown on CNN International right before the first 2012 ‘Obama/Romney’ presidential debate alongside the interview we did on Skype.

From the time the video was released till date, I have been featured on over 50 prominent blogs mostly in the US, France, Italy, Spain, Southern Africa, South America etc some of the blogs are Buzzfeed, Jezebel, CBS Tampa, This Is Africa, MTViggy, YouKu (China’s Youtube) and World Star Hip Hop.

We also heard, you are a jack of many trades and master of it all-musician, model, actress etc, how come, why so multifaceted?

I have had a passion for many forms of art since I was little. When I was five years old I was painting as a hobby and the first play I acted and starred in was at that same age. I played the role of Eve (The Garden of Eden) from the Bible when I was in kindergarten.

I was also part of my school choir and took extra singing lessons at weekends. I attended Christ The King International School in Accra and did my entire basic education there.

I started modeling when I was nine years old starring in a car-rental and restaurant commercial in Ghana, however the biggest commercial I did when I started was for a fruit drink, Refresh, and I was 11 years old at the time. I remember that the pay was good and my father was managing me then.

At that same time, I danced ballet as well as R&B, Dancehall, Hip Hop and took part in a lot of kids’ shows and festivals where I did runway modeling too. My first two runway jobs were for Jimi Delaja at Kiddafest and Mawuli Okudjeto at the Golden Tulip Playback Show in 1995 and 1996 respectively.

In high school, which was Wesley Girls High School in Cape Coast, I was the entertainment rep more often than not in each class I went to, although I was a science student, I did the choreography for most of the performances, produced all the promotional materials and founded the Art Club of Wesley Girls High School. When I completed in 2002, I was awarded Most Creative Student Award of my year group.

FULL INTERVIEW AFTER THE BREAK. PLEASE CLICK ON READ MORE

During my time at Wesley Girls, I was called to play a major role in a very important school play, which narrated the history of the school though I was not a member of the Drama Club. It was an honor for me.

I have always loved art and the limelight so I guess that answers why I am multi-talented. 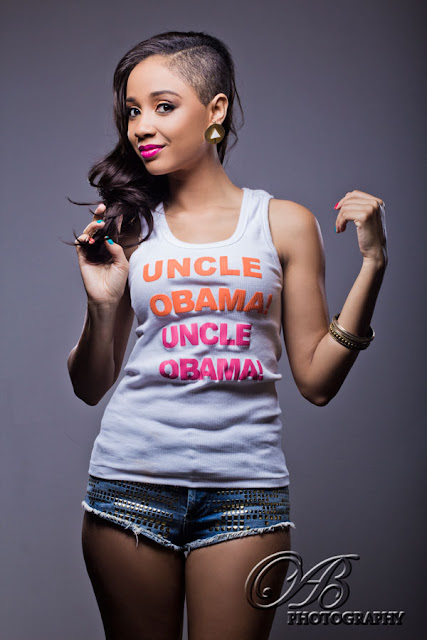 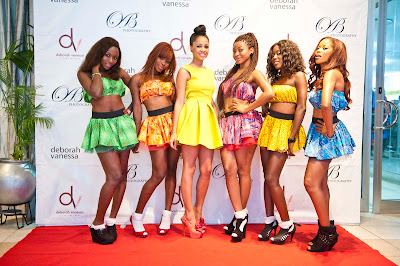 Where did this creative gene come from, and how have you been able to nurture it all so successfully?

As I grew, I found out that my father who is a Petro-Chemical Engineer by profession but now preaches and does other business as his occupation, used to sing in his high school choir and is a big fan of great art works like paintings and drawings. He also used to play the role of drag queen at high school, Adisadel College in Cape Coast.

My mother is an economist by profession and also practices it however; she is a talented knitter (if that’s a word). Her hobby is knitting. Her work is so loved by many that I turned it into a small business where you can order a garment hand-made by her no matter what country you are in. Google FOB-ed Knits.

My grandmother from my mother’s side was a teacher all her working life (may she R.I.P) and she was very good at children’s illustrations. She was also in the military choir and they would sing when the soldiers will return from the war. That’s probably how she met my grandfather in communist Romania.

I think art runs in my family to some extent and I believe I have been able to nurture it successfully because I put my passion first before the financial benefits.

How big are you in Ghana in your own words and what are the plans for the future?

My plans are to own a production company, produce my own TV show, launch my clothing line as a business as well as set up a graphic design and print studio and make a great impact in Africa and the world as a whole. 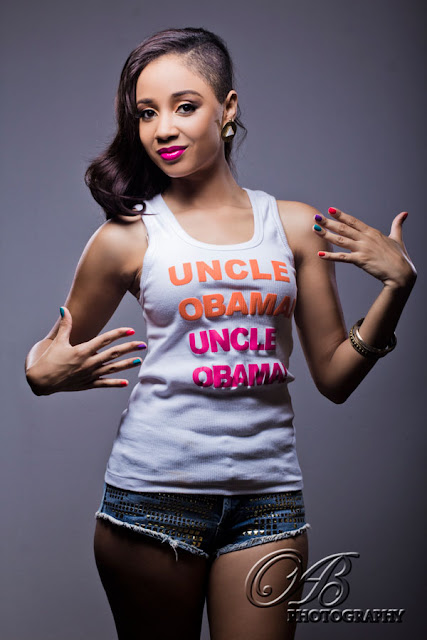 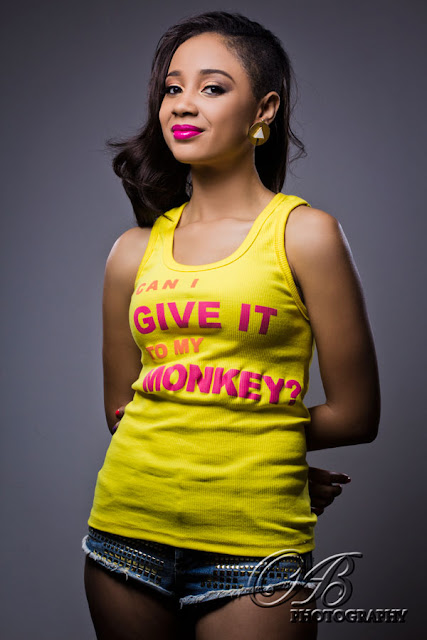 What's on your mind constantly?

I constantly think of how I can be successful.

Do you see yourself as a brand and if so, what kind of brand?

You are gorgeously beautiful and petite, how do you keep up looking so great?

I only eat when I am hungry and as much as possible I eat healthy. I also make sure I get enough sleep. I re-started boot camp recently as well for a healthy heart, stamina and a toned body.

Describe your style, what comes to mind when you want to go out. Who are your style icons?

I have tried to develop a personal style that works for me instead of following fashion trends. I use comfortable styles and I always add a pop of colour and great accessories to create my signature look: It can be tagged, casual but elegant with a hint of quirkiness. I use accessories like a unique beaded necklace or a pair of sunglasses to transform the look from chic to trendy, to effortlessly glamorous. I get a lot of inspiration from the 20s and the 50s for a distinctive and sophisticated look, which suits my creative free spirit.

I admire Audrey Hepburn, Victoria Beckham and Rihanna when it comes to style.

Who are your icons in the business and why?

Wanlov the Kubolor and Rihanna; Wanlov is free-spirited, talented, creative and real and Rihanna, is also talented, sexy, stylish and fierce in my opinion and I feel like a combination of those traits.

In acting, which would you consider your biggest production so far?

I have only done acting for TV so far and my biggest production was starring in an 8-part mini-series TV commercial for Vodafone Ghana shot with the RED by Film Director Ramesh Jai of Apex Ltd in 2010.

What makes you tick?

Negatively, liars make me tick and positively, a challenge.

What's a definite no-no for you?

How do you relax, it’s so obvious you are a bundle of energy?

I go to bed early when at home… my brother, Wanlov says whenever I am home, I’m in bed, but that’s not true. Hehehe

A brief about your background, growing up, educational attainment till date etc?

I was born in Ghana to an Ashanti father and Romanian mother as Deborah Vanessa Owusu-Bonsu. Being from two different cultures has given me the ability to see things from more than one perspective and thus made me open to diversity, readily identifying the beauty in things as well as developing a genuine interest in people and cultures. Ultimately it has led me to being an extroverted woman with outstanding social skills.

I grew up in Accra, attended Christ the King Int. Sch., then Wesley Girls High Sch. I graduated with a Bachelor’s Degree in Publishing Studies from the Kwame Nkrumah University of Science and Technology in Ghana followed by a Master Degree in Book/Journal Publishing from the University of the Arts London in the UK. I have shown professionalism and passion for my chosen field by working successfully for both small enterprises as well as big corporations in Ghana, the United States and United Kingdom.

Naturally being the centre of attention since my childhood, I have always been a ‘show’ person of sorts and have since found the right balance between corporate work and the entertainment industry. My experience as a mentor through the Mannequin Academy, an initiative to give industry training to both professional and amateur models that I co-founded, gave me the confidence that I had the strength to take on greater things.

Going from strength to strength, multiplying experiences as a TV personality and a public figure, and constantly inspiring people I’m set to be a significant player on Ghana and Nigeria’s cultural scene and the best is yet to come.

Awards and recognition till date-

Paint a picture of the next 2 years for us.

By the time the next two years are up, I want to have my clothing design business up and running as well as my TV production house and graphic design and print studio to mention priority… I want to have won awards as a fashion designer, an actress and one for any of my music videos.

FAMOUS VIDEO ABOVE-
Interview conducted by Abiola Aloba, for Maestro's Media, full copyright belongs to MM. REPRODUCTION IN PART OR IN FULL WITHOUT PRIOR NOTIFICATION, would be dealt with appropriately.

Posted by maestromedia at 12:54 AM

aboa!
she is so full of herself
"Do you see yourself as a brand and if so, what kind of brand?

O Yes. A Superstar brand."
modesty does not exist in her dictionary..she for relax small

I have a feeling she didn't understand the brand question. Shallow!

Oh I see! Same gal working up and down at the opening of Eleanor's closet in Accra!
More of she loooooooooves attention and forces it.
Ghana star. Lol.