Wow!!!!!!!!!!, yesterday was the very big day, the deed was finally done, after the initial scare, a lot of people had expected something to happen from out of the blues- Shame to bad people-, this was because of all the drama that heralded the ceremony that finally happened yesterday. But the bride and the groom themselves made sure that nothing was left to chance, security was first class, with about 4 alone guarding the bride who looked resplendent in her beautiful white  wedding gown-for a minute very virginal, the Husband-Mr. Odianose Okojie-Permit my omission of the title Prince, that must mean the new Mrs. Okojie is a Royal Princess, meaning if God permits they might ascend to a throne sometime in the near future, was looking like a Prince Charming in his all white outfit with gold trimmings, and a pair of white, patent shoes to match, I quite like his short Afro like hairdo, let's not lie he looks like a hunk, no wonder MJ was totally smitten.

From the vibes thrown out, it's obvious Love Conquers All, no matter what anyone thinks,now that the couple are now Mr. & Mrs. or better still Prince & Princess Odianose & Mercy Okojie, approved by a Court of competent jurisdiction, approved by the marriage registry of the land, joined together in a church by a Pastor, the time as finally come for all naysayers to now totally back off, according to the living words of God has stated in the bible- '' What God has joined together, Let no Man, Put Asunder''. Mark 10:9, If truly this couple were not in really in love with each other, they wouldn't have been able to weather the tsunami that came their way and the unbelievable scrutiny of their private affairs, we all for one reason or the other either out of love or something else, became unofficial special advisers, castigating,condemning and disproving what does not concern us.

Her bridal train was made up of Yvonne Nelson who was her Chief bridesmaid and then Chika Ike, Empress Njamah, Goldie Harvey,Waje Iruobe & Queen Nwokoye.

No matter what, the wedding is now sorted,so whatever goes on now, is the couples family affair, I believe everyone, should please allow the marriage to work out. What we now pray for is that the couple would continually love each other, and they will be blessed with as many kids as they want, one thing MJ must understand is that she's a star and therefore she has given everyone of us access to her life, so she cannot feel too bad about the undue scrutiny, she just has to live with it, for like  someone once said, the minute you become a star or celebrity, you become a public property. 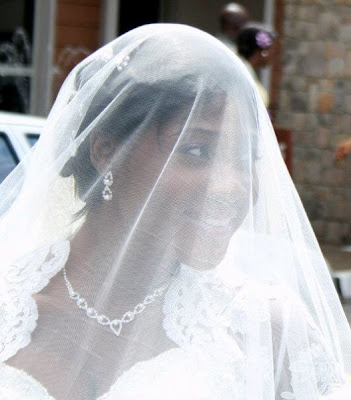 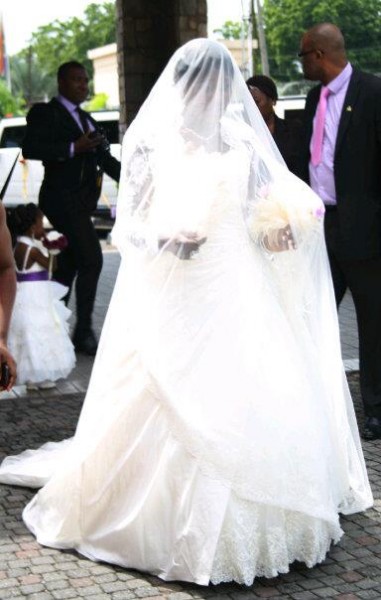 WE WISH THE COUPLE A HAPPY MARRIED LIFE.

Posted by maestromedia at 12:11 PM