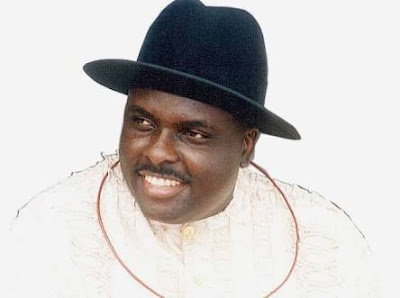 What a victory for the convicted felon and former Governor of Delta State, the warlord Chief James Onanefe Ibori, who recently too the British Secretary of State to court for unlawful detention and who won the case.

For that win the "highly respected politician" and kingmaker, who took to his heels from Nigeria years back to escape prosecution won a staggering £1 Pound in damages. He had escaped to Dubai the UAE, where he had an extraordinary amount of investments​, but was surprisingly extradited later to the UK ,where he was convicted and jailed for fraud. Curiously he had worked in the same UK years before as a store cashier.

Though the worth of victory monetarily wasn't extraordinary, the important aspect of the victory at least was that, it showed that he wasn't deported from the Queen's land, but he was rather "allowed", to leave voluntarily on his own volition. The unlawful detention victory came about because he was detained for a day and some hours more, after his initial release from prison after finishing his term for fraud, which was in excess of £50 million pounds.

Now that he has at least won this colossal and monumental victory, especially since returning to Nigeria, that might actually clear the way for him to contest for any elective post anytime he wants. Chief IBORII has an incontestable number of followers, ready at any time to lead him to victory.

Congratulations to the great man of the people, for this very important victory. May more Victory like this come subsequently.
Posted by maestromedia at 10:00 AM