THE WORLD AT HIS FEET. MAVERICK IGHO SANOMI SALUTED BY CHAMP ANTHONY JOSHUA AS HE CLOCKS 42 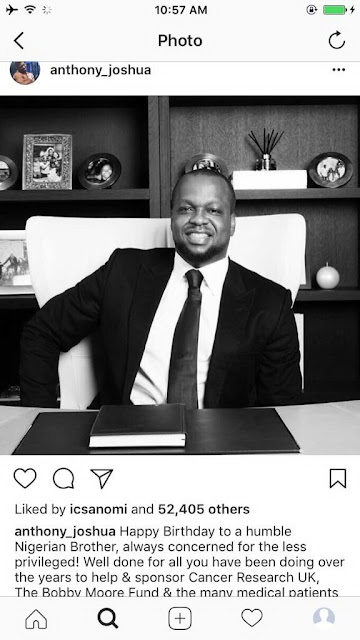 Show me that man that the gods are smiling on and I will show you that man, who has made a success out of nearly all opportunities that has come his way.

IGHO C. SANOMI II, the young Turk who has taken giant steps that those much older and seemingly more experienced couldn't dare take, is one of such that the gods have smiled on very lavishly at that. The young philanthropist par excellence was 42 just yesterday, May 17, 2017 and not wanting to go ostantacious like many would have done, he had a quiet celebration. But those who matter around the world and who know the worth of the young and exceedingly liquid and hardworking man, didn't allow the day just go like that, like an avalanche, the good will and good wishes poured and poured in, in torrents.  It was a flood like storm of greetings, with​ many praying for longlife and good health and more giant strides in his many endeavours.

One out of the severals who thought of salute and wish him very well, was none other than the pride of the moment, the most celebrated boxer on earth presently, the soon to become the undisputed heavyweight champion of the world, the young, the handsome, the strong, the resilient, the one and only Anthony Joshua.


2 heavyweights, who are both distinguishing​ themselves on their different tarmacs and winning many fans to their sides while doing it with much aplomb.

The founder and chairman of Taleveras, one of the indigenous giants in the oil and gas field in Nigeria, instead of having a loud celebration and thought to mark it quietly, especially as it coincided with the conclusion of his "Touch a Life Today" GIPLC, a campaign that is solely funded by the very liquid fellow.

In just 3 weeks and across 2 states Benue and Delta of the nation, plus the FCT Abuja, the brand identified and reached over a thousand (1000) vulnerable Nigerian, who received economic empowerment in terms of finances to cover sundry issues.

IGHO Charles Sanomi II is particularly renowned around the world as a caring philanthropist, who believes in giving back.

He has via the Bobby Moore Funds in the UK, contributed immensely towards the research into the cure for cancer, prostate and bowel cancers to be more precise. And because of his philanthropic activities he has received many International awards, one of such is the Martin Luther King Legacy Awards in 2015.

For this year again, the Bobby Moore Funds and World Boxing Champion, Anthony Joshua thought to commend and show recognition to a man they believed has done so much.  Hear them-

Anthony Joshua-  Happy birthday to a humble Nigerian brother, always concerned​ for the less privileged. Well done for all you have been doing over the years to help and sponsor Cancer Research UK. The Bobby Moore Fund and the many medical patients across Nigeria who couldn't pay their medical bills.

Stephanie Moore, the widow of founder of the Bobby Moore Fund wrote a personal letter in tribute. "Thank you for your generous support of the Bobby Moore Fund.... I am confident that the money raised will make a significant contribution to our pioneering bowel cancer research programme and I am indebted to you for the part you are playing in ensuring this will be a huge success.

I understand that today is also a significant date for you. May I take this chance to wish you a very Happy birthday!

Thank you again. I value your support enormously. One day we will beat bowel cancer. With your help, we can make it sooner.

Greetings also came in from the US Black Caucuses in Congress, from the members of the UK Parliament as well as friends from many diverse backgrounds.

The birthday boy himself responded thus, "Today marks another year in the life of ICS II- God's Soldier Forever. Thank you all, for your kind wishes and prayers.

Posted by maestromedia at 3:21 PM

he is my birthday mate: May the 17th

Happy Belated Birthday to him

He should send me a birthday gift

I remember him from Unijos

He is a very quiet guy

he is my birthday mate: May the 17th

Happy Belated Birthday to him

He should send me a birthday gift

I remember him from Unijos

He is a very quiet guy