WHO IS THE MOST STYLISH OF THESE KINGS? OONI VS OLUGBO

Both are very well respected royal fathers and both also extraordinarily colourful and imposing. Their stools are held sacred, though one far more than the other in terms of hierarchy based on the history, culture and the tradition of the Yotubas.

Both are very okay in terms of wealth, but one far far more than the other, in fact the unsubstantiated belief is that the Olugbo is the richest and wealthiest Nigerian king. He owns and is the chairman of a oil and gas brand, named after himself. The Ooni by contrast used to be mainly a developer, and he is one of the investors that built Inagbe Resort, one of West Africa's most beautiful resorts.

While age is far more on the side of the Ooni, who is just 42. The Olugbo on the other side is his 60s and not getting any younger, thank God for money he would have aged far more obviously. 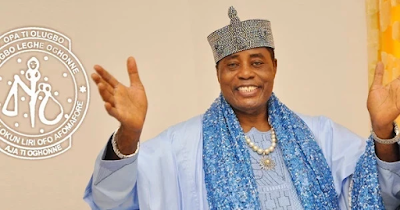 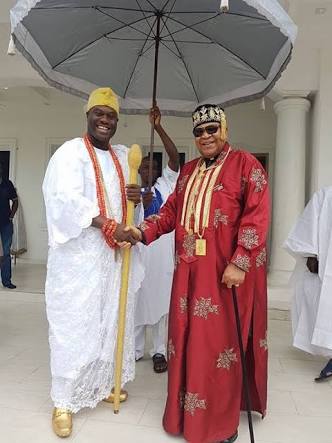 Since they both ascended the thrones of the forefathers, both have acquited themselves so well on the style stake. Though his imperial majesty, the Ooni, favours more of white outfits, that has not stopped him from adding a dash of colours here and there quite often, which has always come out as a perfect blend. It's so obvious that the monarch or his stylist has a good eye.

But 3 things has always stood him out or always stands him out, those his bejewelled crowns in different colours, that sparkles greatly in the light, as they are encrusted with bedazzling beads/crystals are to die for, and that they sit ever so elegantly on his royal head is an added good flair. His very colourful staffs also in different colours, which most often matches his crown and which we suspect like his crowns are made from Swarovski crystals are always a delight to behold. And then most outstandingly, those gorgeous and extraordinarily colourful shoes in all the colours of the rainbow, that he favours are a delight to behold always. There's the dash that the shoes add to kabiyesi's whole package, we beg to be corrected, when we say that no other king in Nigeria bar none, has ever added that kind of twist. he has those royal clogs in purple, lilac, gold, silver etc. The beauty of it all is in the whole package, the Ooni is young, tall, handsome and he has carriage. His youth sets him apart and then, there's that regal, imposing Rolls Royce that completes the whole package. Kabiyesi is on point. No wonder in only just a year of his reign, he was awarded by the organisers of the Africa Fashion Week London & Nigeria, as the ''Royal Father with Panache', an award that came with a gigantic crystal plaque sponsored by Swarovski.

Now also to the awesomely impressive Olugbo of Ugbo Kingdom. whose every ounce of his imposing figure speaks royalty. There is the air that the oba invokes, the atmosphere that surrounds him. Though not as young as the youthful Ooni, Kabiyesi still knows a thing or 2 about style apparently and he ain't shy at all about it. is it really him, or does he have in his employ a stylist? That we dont know. But we know that he favours all colours of super expensive laces very well and he wears his garbs well and they don't wear him. Unlike the Ooni, he favours more mature colours in his shoes, a sizeable collection of which he owns, being a billionaire, those little things wouldn't count for him. His jewelry collection made up of humongous neck chains & diamond encrusted rings and watches are out of the world. Those outstanding, gigantic gold chains mixed with beads as worn by the Olugbo, the Ooni favours more the traditional corals. It is with his car collection that the Olugbo, throws many all comers down, the king loves those machine on wheels and he always updates his garage as at when due, with many colourful state of the art, custom made chariots. He has them in many brands and exciting colours.

So who of the 2 royal fathers is the most stylish? The excitingly youthful Ooni? or the never say die Olugbo?

Posted by maestromedia at 2:57 PM

Ooni should get rid of whorelori Wuraola that alone is enough for us not to see any good deed in him. That whorelori continues to ridicule him.
How can you follow your husband to Jigawa and meet Governor Badaru, when Badaru was the closest person to your Ex Saminu when he was in power. Badaru knew the in and outs of your fuckery with Saminu. And you go and stand with your Kabiyesi before him.
Whorelori continues to ridicule this fine gentleman. Other kings have wives and other notable men have wives too.
Why is Olori always spoken about in such bad light?

The Olugbo. I remember his styles in ovation years back, met him recently and for his age he's still stylish.

An age old saying is "when a king marries a prostitute, she becomes a queen." Old things have passed away. As if he's any better. His evil sisters can't come near him now and most of the negative reports about her are from them. What they did to his first wife they cannot try with this one. They fit each other

At anon 3.51 You are very funny with the name - Whorelori. That fits her perfectly. I love the new name you gave to the hoe - whorelori. Hahahaa. There is one crazy Anonymous that is coming for you for calling her by her real name - Whorelori. The crazy anonymous has been attacking anyone that says anything that is true about her

Who is speaking about Olori in such bad lights if not pained soured beings like you?
You are so pained so much so that your painment is obvious.
You can not see beyond your hate for the Olori.
Simple question that was asked, you had to bring in the Queen into it.
Buhaahaha. You must be having sleepless nights concerning Olori.
You will choke in your hatred of the delectable Olori one of these days.
Aloba please bring a picture of Our Queen, post more pictures of her let them kuku die.
Yeye dey smell

At Anon 8.09 Wuraola is out to be Olori and not to be wife unfortunately. OONI need an arm candy and Wuraola is into limelight, superficial, vain and shallow, I guess their union is match made in Vanity world. How long the honeymoon will last before OONI get a real wife is s matter of time.

At Anon 8.09 Wuraola is out to be Olori and not to be a wife unfortunately. OONI need an arm candy and Wuraola is for the limelight,
she is also superficial, vain and shallow and I guess their union is match made in Vanity world. How long the honeymoon will last before OONI get a real wife though that can be Olori and a real wife to him is a matter of time.

WHO LET TGE DOG OUT? GO BACK TO YOUR CAGE AS YOU ARE PAINED - WHORELORI . Hahahaas

WHO LET TGE DOG OUT? GO BACK TO YOUR CAGE AS YOU ARE PAINED - WHORELORI . Hahahaas

How stupid and clueless can you be? Did OONI divorce his present wife before he married Whore Itohan (her real name)? Is She OONI first wife? Was Wuraola at OONI CORONATION? Was it not Olubukunola his wife that was at the coronation? Life goes in circle and the same way he sidelined his wife for Wuraola is the same way he will sideline Wuraola for decent girl with brain and beauty. What goes around comes around as Karma is a bitch. Just wait and see how it goes

How stupid and clueless can you be? Did OONI divorce his present wife before he married Whore Itohan (her real name)? Is She OONI first wife? Was Wuraola at OONI CORONATION? Was it not Olubukunola his wife that was at the coronation? Life goes in circle and the same way he sidelined his wife for Wuraola is the same way he will sideline Wuraola for decent girl with brain and beauty. What goes around comes around as Karma is a bitch. Just wait and see how it goes

Guess who the pained ones are? You losers.
Keep loosing losers,while Olori keeps winning.
Bow down bitches