THE NEXT BIG THING- HERIETH PAUL

This is the face of the new model bombshell that is already been compared with supermodel extraordinaire- Naomi Campbell, she's already on the cover of Elle Canada, the highly successful fashion/style magazine and she has strutted with some of the most amazing model colleagues at some of the biggest shows in the world, at only 16!!! she's already headed for model heaven , the Tanzanian model lives in Canada & her name is Herieth Paul. 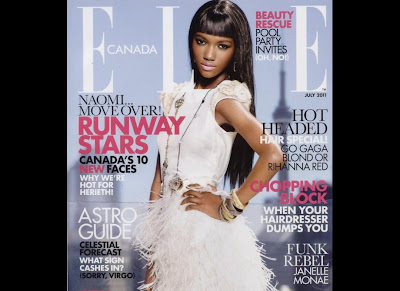 Some have said she looks like the young Grace Jones, while some have called her 'the black Kate Moss,' her dream is that by the time she's 18 she wants to have appeared on all the top magazine's covers and also to have modeled for some of the biggest brands in the world, the Elle Canada magazine cover is her 1st solo cover and with that she seems to be headed in the right direction.
Posted by maestromedia at 3:51 PM