After the 5th try in all competitions, Nigeria's senior national team-the Super Eagles under the able captainship of Joseph Yobo-Nigeria's longest serving player so far and the managerial excellence of Coach Samson Siasia, a former striker in the national team before now, pummelled the Argentine senior national team-less the all conquering & merciless Lionel Messi into submission winning the match played at the National Stadium,Abuja,FCT, today June 1, 2011 by 4 goals to 1, the penalty awarded the Argentine team, was even under questionable circumstances, so as to leave the match at a more respectable scoreline. One must say, that the reign of Coach Siasia seems to portend great things to come, and the match seems to be a good present to the newly inaugurated President of the country-President Goodluck Ebele Azikwe Jonathan.

This would be the 1st time out of the 5 times that Nigeria has ever beaten Argentina in all competition,except for the dream team at the Olympics, the first match in 1994 at the World Cup in the USA, Nigeria was so unlucky to have lost the match 2-1, after scoring first, the second time, it was at the 1995 FIFA Confederations Cup in Riyadh,Saudi Arabia where both team played a goalless draw, the 3rd time was at the 2002 World cup in Japan, which the Argentine team won by 1-0, the last time was as recent as 2010 World Cup in South Africa, where the Super Eagles were also pipped 1-0. 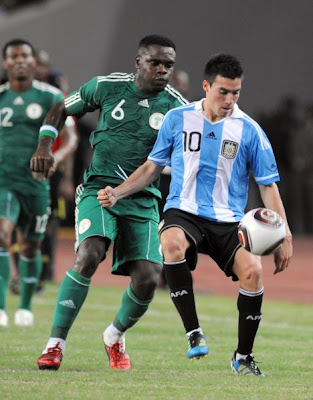 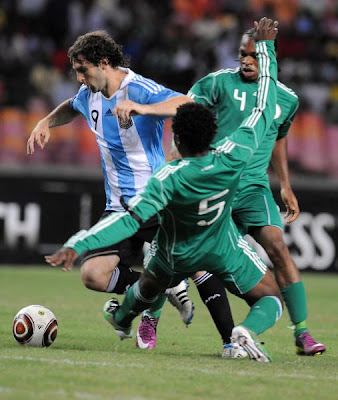 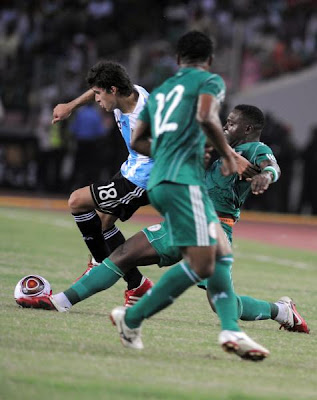 So with this 4-1 scoreline, a new world order seems to have been ushered in, the very prolific Ikechukwu Uche scored a brace,while former West Ham striker Obinna Nsofor scored a penalty and the last goal was scored with much aplomb by Fenarbahce's new sign on-Emmanuel Emenike
Posted by maestromedia at 1:02 AM