Performer extraordinaire-Rihanna & one of top the musicians of the moment, had an unfortunate fall on Wednesday  June 22,2011, while performing at her ongoing concert in Edmonton,Canada. After doing one of her famous waist dance move, and wanting to move from one side of the stage to the other, she tripped over her boot and fell forward hard on her knees and hands, though the fall was in split seconds it was noticed by those at the concert, but like a true trooper that she is, she quickly got up, waved her hands and continued her dance routine.
She later on that night tweeted about the fall-Did I tell u guys I fell in Edmonton! Lol... #ManDown #rockstarshit 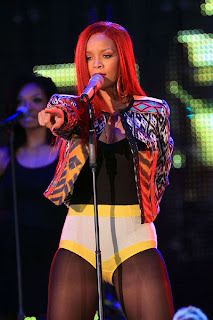 The fall occurred while she was gyrating to one of her songs-WHAT'S MY NAME, this is the 3rd week of her LOUD Concert in Edmonton, Canada
Posted by maestromedia at 8:25 PM